‘My boyfriend fled again – this time he was really gone’

Tell me about it: My now ex-boyfriend never cared for me as I cared for him 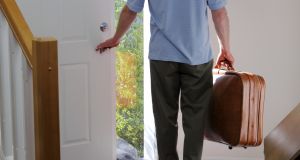 “We cannot change other people and your ex does not seem to be blessed with self-awareness so he continues with a pattern of behaviour that is both destructive to himself and to you.”

Question: My (now ex-) boyfriend of four years was very quiet, but each time we had a fight, a discussion or even small disagreements he would threaten me with: “Stop or I will leave you.”

He would hurt himself instead of hurting other people. Two years ago we had an argument and he fled. Ten days later he returned.

The following year, I was very upset (due to a family death) and he told me that he was annoyed with me for being so sad. He said if I keep being unhappy he would leave me.

Early in 2018 we got engaged. It was an amazing day – we really enjoyed it. It was a small ceremony between friends and family.

He did not tell me, but he had already organised to go to Russia for the World Cup and later he went to Greece with his friends. I didn’t know anything about the trips, but he was always selfish. Always him first, always his satisfaction first.

He definitely never made the same efforts as I did. He always said to me: “Will you always love me as now? Will you always care for me so much? You will: you do everything for me to be happy.”

A few months ago at a party he got upset at me because I wanted to stay later with my sister. He started shaking me and hitting me on my arms and legs and I got bruises. After all that, I still went the next morning to talk to him. He wasn’t there. He had fled abroad again and this time it was five weeks before he came back.

He felt very sorry. He cried. He wanted to make everything good again. He wanted to start from scratch. He said he could not be happy without me.

A few months ago I was away and, when I came back, he was not here. He had fled again. This time he was really gone. That hurts a lot.

We fought together so much for our relationship as many people were against it because of the culture differences (we are from different countries), but we made it for more than four years.

Answer: It seems that this relationship has caused you a huge amount of hurt and that each time you thought it was on a safe footing, you were again rejected until finally you realised it was over. In spite of your ex-partner’s continual wooing and rejecting of you, plus his violence towards you, you saw enough good in him to consider spending your life with him.

This leads me to believe that there truly is a dark and a bright side to his nature and perhaps this relationship was one in which you were victim to his defects. It is probable that you tried to save this man from himself: you could see that he had the possibility of being a good and responsible man and perhaps you thought that through your love and support, this side of his nature could develop and become the dominant part.

However, as you have discovered to your dismay, we cannot change other people and your ex does not seem to be blessed with self-awareness so he continues with a pattern of behaviour that is both destructive to himself and to you. I say that it is destructive to himself as he has lost out on the possibility of spending his life with someone whose influence would be to draw out what is best in him; ie commitment, courage and self-development.

Many people reading this will recognise the outline of an abusive relationship and even though you are currently suffering, it is good that you are free of it as these relationships can often continue in a cycle that is ultimately debilitating for you, the abused partner in the relationship. It can feel very seductive that your partner is so sorry and repenting but this period is then followed by blaming, anger and rejection.

There is no doubt that your ex-partner is in need of professional help but the focus of your energy and attention now needs to be on rebuilding your own self-confidence and self-esteem. There are many support groups for people going through these experiences and you might look up the equivalent of Women’s Aid or women’s support groups where you now live. It can be liberating to know that there are others who both share your experience and who have also found the skills not only to survive but to thrive in their lives.

Your recovery will take time but committing to your own development will contribute to your evolution as a person and correspondingly lessen the hold your ex has on you.