Billy Connolly is helping others by talking about Parkinson’s disease 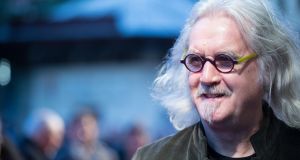 Billy Connolly: by talking so frankly about his disease, he helps to lift the veil shrouding Parkinson’s. Photograph: Ben Pruchnie/Getty Images

Billy Connolly is one of my favourite comedians. Perhaps a little “un PC” for some, those of us brought up on a diet of his unique humour and with fond memories of standout TV interviews with Michael Parkinson, will always have a soft spot for the “Big Yin”.

So to hear him speak over the festive period on BBC about life with Parkinson’s disease, saying he is “near the end” and life is “slipping away”, was sad.

The Glasgow-born comedian and actor was diagnosed with the degenerative neurological condition in 2013.

In a two-part documentary on BBC 2, he said: “My life, it’s slipping away and I can feel it and I should. I’m 75, I’m near the end. I’m a damn sight nearer the end than I am the beginning. But it doesn’t frighten me, it’s an adventure and it is quite interesting to see myself slipping away.

It’s a typically unflinching description from a man who has always said (in relation to his tough upbringing) that he doesn’t like people feeling sorry for him.

Now 76, he continued to tour after the initial diagnosis. But in 2017, he was forced to give up after the disease rendered him ‘rooted to the spot and afraid to move’. Used to incessantly prowling in front of the stage, he now stood still with his symptoms weighing on his mind.

“It [Parkinson’s] takes a certain calm to deal with, and I sometimes don’t have it. I sometimes get angry with it, but that doesn’t last long, I just collapse in laughter.”

On camera, Connolly had a profound hand tremor much of the time. Yet in some scenes, his hands were rock steady. His upper face is mask-like however and his voice may not be as strong as it once was.

Parkinson’s disease is a chronic neurological illness precipitated by the death of brain cells that produce a chemical messenger called dopamine. Nerve cells in a deep part of the brain, called the substantia nigra, degenerate. These cells make dopamine; as the levels of the brain chemical decrease, the symptoms of Parkinson’s disease begin.

If you imagine the substantia nigra as the brain’s “gearbox” and consider dopamine as the main lubricant for the gearbox, then as this part of the brain seizes up, the three main symptoms of tremor, muscle stiffness and bradyknesia (a slowness in initiating movement with associated freezing) appear.

In addition to the symptoms we saw on camera, other problems likely to be experienced by Connolly include difficulty with swallowing and speech, constipation and sleep disturbance. Both depression and dementia can also occur. About one in 100 people develops Parkinson’s disease, with an average age of onset of 60 years.

Connolly went on to describe the degenerative disease as him progressing to be on the “shadowy side of the hill, doing the next episode in the spirit world”.

However, Parkinson’s will not kill him; rather it progressively weakens the body, making it vulnerable to chest and other infections. You do not die from Parkinson’s but rather with the disease.

Probably more so than many chronic illnesses, the effects of Parkinson’s are unique to each person. It is not possible to predict which symptoms you will get or when you will get them.

In general medication initially slows down disease progression. But the brain sometimes enters a “stop-start” pattern, as if it becomes intermittently immune to treatment.

By talking frankly about his illness, Connolly hopes to help others with Parkinson’s disease. Let’s hope the intimation of his imminent demise is well wide of the mark.