Why your muscles feel sore a day or two after exercise, and what to do about it 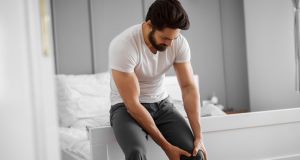 If you have upped your training routine, returned to exercise after some time off or given a new activity a go, the chances are you have felt the characteristic ache of delayed onset muscle soreness (Doms).

Usually kicking in around 24 to 48 hours after exercise, muscles feel tender and sore as a result of microscopic damage to the muscle fibres, which occurs when you force your muscles to work harder than they are used to, or use muscle groups that you don’t often reach in your regular workout. It can leave you feeling achy and stiff, with a walk around the office taking on a John Wayne feel.

Any exercise to which you’re unaccustomed can result in a bout of Doms, says Dr Mark Wotherspoon, a consultant in sport, exercise and musculoskeletal medicine. Simply put, he says, it suggests you are “doing too much too soon”.

“If you look [at a normal muscle] under an electron microscope, you see that there’s a normal architecture and normal structure to the muscle fibre,” he says. “When you look under the electron microscope with Doms, the whole architecture is disrupted. Essentially, it is true muscle damage, but it’s at the muscle fibre level as opposed to a muscle tear that you would get when you’re running and your hamstring goes.”

Doms can last up to five days, with the effects usually worst on day two or three, then gradually improving without treatment. It is a normal part of building muscle strength and stamina, but coach Nick Anderson warns that it could be telling you it’s time to review your workout. “A lot of people like [DOMS]because it means they’ve worked really hard and it’s a great feeling, but if it’s excessive and you’re getting it all the time then I would be questioning either your recovery strategies or your training plan.”

You are more susceptible to injury for a period afterwards

Any changes should be gradual to allow muscles to adapt. “If you don’t get rid of that tightness and allow the muscle fibres to repair, you are more susceptible to injury for a period afterwards.”

In the days following the onset of Doms, Anderson says, “don’t hammer the same muscle group again”. Instead, he suggests using other muscle groups for a few days at the gym or, if you’re a runner, simply lessening the intensity. He also suggests incorporating a progressive warm-up, in which movements become gradually more intense, and not to skimp on the warm down.

Good quality sleep also plays a factor, when it comes to recovery. Although you will want to go easy on tender muscles, Wotherspoon doesn’t recommend completely abandoning your fitness routine. Instead, he advises incorporating light exercises. “If I ran on Monday and then on Tuesday was sore, I might go for a light bike ride or a little jog on Wednesday,” he says “So, exercising through it isn’t a bad thing, but exercising and ignoring it, and exercising hard, probably is not the best thing.”

While nutrition can’t prevent Doms as “a natural part of the training adaptation process”, it may help reduce the effects, says sports dietician and ultrarunner Alexandra Cook. “Most nutritional interventions to reduce Doms are closely related to inflammatory response and aiding the rebuilding of damaged muscles.”

She recommends a portion of protein – the main nutrient needed for muscular repair – at each meal as well as snacks to support the recovery and muscle adaptation process. “Regular intake of carbohydrate is vital to replace muscle glycogen depleted during exercise. If you skimp on the carbohydrate, you run the risk of excessive protein (muscle) breakdown, which won’t contribute positively to the training process.”

Ted Munson, a performance nutritionist at Science in Sport, agrees that carbohydrate intake is key, although the amount to consume “depends on what you’re doing. If you’re undertaking high-intensity, prolonged-duration exercise like a half-marathon, you may need to consume 8-10g of carbs per kg of body mass per day. For shorter-duration, lower-intensity exercise, the demand may be reduced.”

Water is, as usual, key

Both Munson and Cook agree that eating something as soon as you can post-exercise is beneficial, with muscles primed to take on nutrients within 30 minutes of finishing exercise. Cook advises a simple carbohydrate and protein-based snack, while Munson suggests preparing a shake in advance; both recommend following this with a balanced meal within the next hour.

Water is, as usual, key, says Cook. Because muscles are made up of a high percentage of water, “even mild dehydration can make your Doms worse”. But although staying hydrated may reduce symptoms, it won’t speed up repair from muscle damage. Besides nutrition, elite athletes and novices alike swear by a number of recovery techniques, such as wearing compression clothing, using a foam roller and taking ice baths (who remembers the image of Andy Murray in an ice bath, clutching his Wimbledon trophy?) – but their effectiveness is debatable. Anderson is a fan of compression clothing and massage, but advises caution when it comes to foam rollers, which he believes can be “massively overvalued by people . . . It’s a very personal thing: some people get on with it very well, some people don’t, some people do too much of it and actually cause more bruising through the foam rolling than they would have caused through the exercise.”

Wotherspoon – currently lead medical officer at Southampton FC, and a medical officer for the England cricket team for more than a decade – says that, while compression stockings, ice baths, light exercises and sports massage play a part in the recovery programmes of elite athletes, it may be all in the mind. “There’s some evidence that it doesn’t matter which one of them you use, because the most effective recovery component is psychological,” he explains. “So, in other words, whatever makes you feel better, do. If you’re absolutely convinced that recovery stockings are the thing that helps you, crack on and use them; if you want to get in an ice bath, happy days. There’s no good scientific evidence that any one of those is any better.”

The best way to deal with Doms is to avoid it in the first place, he says. “If you do a very slow, graduated exercise programme, you’re much less likely to get Doms. It’s all about trying to ease people into exercise at a slow, steady pace.” – Guardian