Kerry O’Flaherty: ‘You have to set yourself realistic targets and goals’ 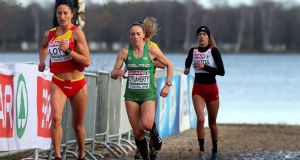 Getting back into running, or starting to run, can be difficult but Olympic runner Kerry O’Flaherty says that runners of all abilities should consider joining their local athletics club – both for motivation and company.

“Athletics clubs have runners at all abilities, from joggers to runners to racers. Gone are the days when there are just elite athletes in athletics clubs,” says O’Flaherty, who started running at her local running club in Newcastle, Co Down as a teenager.

A keen runner from an early age, O’Flaherty beat most of the boys in her primary school races and began competing in cross-country races in secondary school. In fact, it was her local athletics club that suggested she begin training there. She went on to compete in the All Ireland schools cross-country races.

She took a five year break while she studied for a degree in sports science - and trained to become a PE teacher at the University of Ulster. She then returned to running in her mid-20s. “My first love is 800m or 1,500m track races but I do cross-country for winter endurance,” she says.

She says that running with other people is a key to keeping it up. “People who’ve never run before need to build up to running from brisk walking or jogging. There are lots of couch to five km groups and online support nowadays,” she says.

For more experienced runners, she says it’s still important to ease yourself back into running after a break. “You have to set yourself realistic targets and goals. If you’ve been off running for a while, you can pick up little niggles or injuries which will push you right back to square one if you do too much too soon,” she says.

She also recommends cross-training as a good compliment to running. “Cross-training, swimming, spinning [cycling on a stationary bicycle] or aqua-running [running in a pool with a suit or belt which holds you up in deep water] are all fantastic cardio exercises. It’s important to get good advice on good quality running shoes too,” she says. Planning ahead to run in organised 5km, 10km or longer runs is also something she says helps motivation.

O’Flaherty started training for competitions in 2009 with the aim of competing in the 2012 London Olympics. An Achilles tendon injury put paid to that but she continued to train and made the European 3,000m Steeplechase final in 2016 and went on to compete at the Rio Olympic Games. She competed in the European Cross-Country Championships in the Netherlands in November, 2018 and is now focused on the World Athletics Championships in Doha in October, 2019.

During the winter months, O’Flaherty runs for between 45-60 minutes twice a day. “I run four days a week with my club and get my own miles in on the other days,” she explains. She runs up to 113km (70 miles) a week in the winter months and between 70-90km (45-50 miles) a week in the summer months when she’s more focused on shorter intense track sessions. She also travels to the French Pyrenees every April to train at altitude for a few weeks.

However, in spite of all this, she still manages to work part-time as a sports massage therapist and volunteers as an athletics coach in Newcastle. “I mentor a few young athletes and also mentor the juniors at the British Milers Club,” she explains.

O’Flaherty is aware of the support needed for runners of all abilities. At the Dublin City Marathon in 2018, she was one of the Asics Front Runners, a group who motivate participants during the last mile. “Sometimes we are called running angels because we see who is struggling, ask them if they’d like one of us to run with them and support them if they need a shoulder to lean on,” she explains.

In her blog, she describes how she helped a member of her own athletics club to reach the finishline at the Dublin Marathon in 2018. “I think this support should be promoted more. The medical staff doesn’t always understand how individuals have put a whole year into finishing the marathon. What we do also takes pressure off the medics who need to tend to people who really need their help,” says O’Flaherty.

Space, character and light in D6 for €1.25m
Real news has value SUBSCRIBE