Genetic testing: A difficult choice for some, but knowledge is power 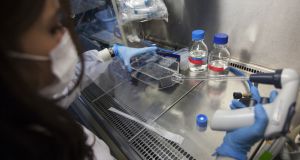 A small sample of cells are tested to see if there may be a cancer-causing mutation. Photograph: iStock

We all inherit traits from our parents, some being more welcome than others. But while there is precious little we can do about the genes passed on to us through our family line, when it comes to the prevention of certain diseases, a simple test can determine whether or not we have inherited a predisposition – and with this knowledge we can take action.

Despite a genetic-testing service being offered to those who have a family member with a faulty gene mutation, a recent report from St James’s Hospital has shown that many people are not taking up the test when offered.

“Only a small number of people who are eligible for predictive testing actually take it up,” says leading cancer genetic specialist Prof David Gallagher. “For some people they may not be aware of the benefits, others may be afraid to find out the result, some are worried it will affect their insurance policies, while some may simply be too busy.

“But too often I have seen people in my clinic who are presenting with cancer at a late stage because they didn’t take up the offer to get tested and undergo preventative treatment if necessary.”

Prof Gallagher says genetic testing is covered by many insurance policies and while current treatment (if test proves positive) often involves the surgical removal of healthy body parts, it is a necessary means to an end. “Removing healthy organs may seem extreme but I believe it is better to have preventative surgery than to try to treat the disease when it is already established.”

The recent news that a woman was falsely told in 2009 that she had tested negative for the BRCA1 gene at Our Lady’s Children’s Hospital in Crumlin and subsequently went on to develop ovarian cancer is unlikely to encourage more people to undergo genetic testing. But Minister for Health Simon Harris has said this is likely to have been an “isolated incident” and down to a “transcription error” rather than any fault in the test itself.

Indeed, I know only too well the importance of genetic testing as, with a very high rate of cancer in my family, when a relative presented positive for the BRCA1 mutant cancer gene, I was offered the chance to undergo the test myself. And although obviously nervous about the outcome, I didn’t hesitate to take the opportunity to find out whether or not I too was positive as I knew that this knowledge would put me ahead of the game when it came to catching cancer early. Thankfully the test proved negative, so this is one less thing to worry about.

We are all know someone who has been diagnosed with or sadly taken by cancer and Dr Robert O’Connor, head of research at the Irish Cancer Society, explains how the disease is ultimately caused by mistakes in the genetic code which “tells the cells in our body what to do”.

“The best known example of this is the BRCA mutant cancer, made very public by the case of actress Angelina Jolie, ” he explains. “Everyone is born with BRCA genes and these are very important in protecting cells from damage but certain mutations in these genes will stop this gene-protecting cells. People with BRCA mutations are more likely to suffer a number of particular forms of cancer and to have these occur at very young ages. There can be lots of different mutations in particular genes, and we now know of many different genes where mutations can increase the risk of cancer.

“So genetic testing involves identification of people who might harbour these mutations [either because they have had an usual cancer at a very young age or there is a history in their family of such unusual cancers] as well as counselling and preparation prior to taking a small sample of cells from their body to test to see if there may be a cancer-causing mutation.”

Dr O’Connor says cancer genetic-testing data can be important in research for a number of reasons and while the decision to undertake a test is a complicated one which can cause worry and upset, he would encourage anyone who has been offered the chance to consider it.

“In Ireland we are fortunate to have very skilled [if under-resourced] professionals to help guide people as to the best decision to make,” he says. “At the Irish Cancer Society, we very commonly get asked by people whether a cancer affecting them or their family could be genetic so we know this is a common concern.

“Although in more than nine out of 10 cases of cancer the cause is bad luck or contributions of their environment and lifestyle, some people may have indicators that a cancer is genetic in origin – for example, multiple blood relatives having a specific form of cancer at an usually young age. However, until a test is undertaken, one cannot know if this is the case.

“So where there is an indication of a cancer being of a genetic origin, this can empower patients to make healthcare decisions which can reduce their chances of dying from that cancer. It can also reassure worried family members where the test provides a negative result.”

Prof Gallagher agrees: “Too many people are dying from preventable cancers and those who are genetically predisposed to these should not be frightened about having the test done,” he advises. “They should speak to their GP to see if it needs to be investigated further and, if it does and genetic testing is offered, then I would encourage them to attend a cancer genetics consultation and learn about the benefits.”

London Fashion Week: Paul Costelloe back in form with a little help from his son
10