For months, I have been self-sabotaging my previous weight-loss success 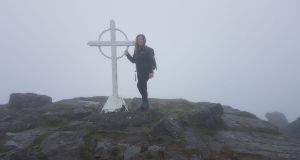 Resetting my mind and body back to my “normal” habits after a significant weight gain and some new unhealthy behaviours has not been straightforward but today the sun was shining, the birds were singing and I was feeling good.

As I set off with my backpack on my hike to the top of Galtymore in Co Tipperary, I was adamant I would solve the mystery of my recent self-sabotaging behaviours that had caused me to go from being just 1lb away from losing 4st (25.5kg) to gaining a stone instead.

It had taken me about two months to face my destructive behaviour, which seemed illogical to me, and I wanted to put some more logic as to why I was doing it. Self-sabotaging took a lot of effort and even more to ignore it so I wanted to make sure I didn’t return rebelling against my own success and stopping myself from reaching my own weight-loss and fitness goals.

So a five-hour hike in the sunshine up to a 919m peak with magnificent views of the Glen of Aherlow seemed to be the ideal way to clear my mind, refocus and make future plans. But mother nature had different plans for me and was keen to teach me a lesson of her own. With brute force, I might add, because it’s fair to say she slapped me across the face using the elements many times over the next couple of hours to make sure I didn’t miss the point.

The Galtee mountains are spectacular to look up at but as I gazed upon them that morning, I worried that although my fitness had been improving over the last year, my recent setback had impacted my confidence and maybe I wasn’t as fit as I thought. I had climbed Galtymore twice before, taking a different route each time. The first time I was 5st 6lb (34.5kg) overweight and it took six punishing hours to complete it.

My legs and lungs screamed at me for much of it. It was tough but I loved it, and it made me realise my unhealthy relationship with food and fitness made doing physical activities I enjoyed more difficult than they should be. The second time I hiked it I was almost 3st (19kg) lighter and it was incredibly good weather. It was still a challenging hike, particularly in the steep parts, but a sense of achievement of reaching the summit and not feeling anywhere near as exhausted as the last time was exhilarating.

I had no idea my third time would be a completely different experience again and probably the most vulnerable I’ve felt. It wasn’t the hike I intended to do but in hindsight it was the one I needed to do.

About half way up the sun ran away and clouds gathered over the mountains. A gentle rain began to fall and it darkened to the point my sunglasses were surplus to requirements. I had come fully prepared for changeable weather, including rain gear, maps, navigation tools and a bivvy bag, but no longer being able to see the peaks or some of the sharp drops I knew were there changed the mood of the day. It was no longer one of contemplation as now sharp focus and concentration was needed.

At one stage I thought I was in the final stretch climbing to the peak of Galtymore to then realise I’d gone the wrong direction and reached the nearby peak of Galtybeg instead. That was not part of the plan, and don’t be fooled by the name – Galtybeg (small hill of the Galtees) is 799m high and not that small. I had to backtrack, go back down to where I originally was and follow the correct, slightly longer route to the top. I learned the hard way that going straight up is not always the best way to the top.

Finally, when I reached the correct summit it was a great feeling and the energy of the mountain was palpable in the wild solitude. There were no views visible and it wasn’t long until I could barely see the big white iron cross as the weather quickly worsened. Normally I’ve always thought reaching the summit was the difficult part of hiking finished but this time it was the descent that was slow, tedious and hard work.

The winds became more fierce and battered the rain in waves against my face over and over again. I had to focus on each small step as I walked over the heather and soft boggy ground cautious not to roll my foot or slip. I reached peak self-pity when the relentless rain caused my sunscreen to go into my eyes making it difficult to see for a while. “This mountain is trying to torture me,” I muttered to myself under the deafening winds as I continued with my tiny careful steps.

I was probably more frustrated I couldn’t see any rock to use as a sanctuary to eat some food. Time seemed at a standstill and then without warning the winds disappeared, rain eased off, the mist drifted away and the sun peaked through again.

It almost felt like the whirlwind weather of the last couple of hours could have been in my imagination except for the water still dripping from my clothes, my windburned red face and my curly hair now clearly in shock from the wind, sticking out in every direction. But I felt great and loved all of the hike. I hadn’t noticed any tired legs or being out of breath on the hike, I’m not even sure if I was. The mountain had forced me to be present in the moment.

I learned a different lesson – the importance of being present in the here and now – than what I had expected. I could have looked at the detour (aka getting lost) as a failure, time wasting and frustrating but ultimately it was a small failure that made me stronger and more determined for the rest of the hike. I had to make my way back down, reset and do better. It was similar to my recent weight gain.

Yes I’d backtracked, gone the wrong way, but it will eventually show me how to succeed better, and make my weight loss and healthier lifestyle permanent. But what the hike showed me most is I needed to move on from trying to figure out why I had self-sabotaged as it was getting me nowhere.

I didn’t have a specific answer, no “aha” moment to the reasons but I’m aware of it and motivations will likely reveal themselves in time as I progress with pushing myself out of my comfort zone. Life often doesn’t go to plan but if I prepare, keep going and focus on here and now, the small steps, I will get there.

It won’t always be easy but the result is always worth it.