How I cope when the annual blues come knocking 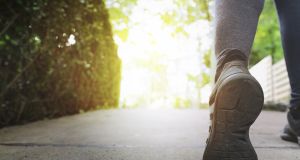 I know today that walking in a ‘green’ area can lift your mood. Photograph: iStock

It is often impossible to know why one memory should persist over another. Why should I remember every autumn walking around the roads of Dublin 4 trying to shake a sense of hopelessness? Why should the memory centre on a public library, the Pembroke Library on Anglesea Road, a pleasant brick building?

When I think of the leafy roads of Ballsbridge, the leaves are always turning brown and I’m always going to and from the library, feeling down. I also used to walk for hours along the roads and streets down into Baggot Street and streets I didn’t know because I instinctively understood that this was a way to cope with the blues.

The feeling was made up of the pain of unrequited love which isn’t unusual at that age (though it feels unique), of a sense of futility and of a conviction not belonging.

Walking helped in the sense that I couldn’t have sat in my bedsit with these feelings and I had not – fortunately – discovered the use of drink as an anaesthetic.

I know today that walking in a “green” area – and the roads around Ballsbridge qualified – can lift your mood. I imagine that the exhaustion of the amount of walking I was doing helped to get me to sleep each night.

I couldn’t go for counselling because there were no counsellors to go to in today’s sense of the word. We didn’t have the concept. There were psychologists but it wouldn’t really occur to a person to go to one of those even supposing they could find one.

So I had to be my own counsellor, thinking and thinking about my feelings, trying to find a way out, a process known as rumination which I now know can tip you into depression. Luckily I didn’t fall into the pit though the memory of the emotional pain and bleakness of the time hasn’t let me.

Nor were there many, if any self-help books in the shops that I can recall. I had a copy of Kahlil Gibran’s The Prophet given to me by the girl was I unrequitedly in love with. It was a popular book among melancholic types like me.

Gibran was a Lebanese-American poet and artist and wrote in a mystical sort of style. Somehow it provided comfort, especially the lines “Your joy is your sorrow unmasked. And the selfsame well from which your laughter rises was oftentimes filled with your tears.”

I wasn’t sure what it meant but it helped.

So reading, even that strange reading, helped along with the walking. I also found that making a plan of fairly normal activities – walking, reading, eating, going to movies and so on – and working through it got me through the “down” period without bringing me to a halt.

I mentioned above that the memory of the time remains with me but I think it’s important not to dwell on memories like that. They have a seductive quality – as Gibran also wrote, “who can depart from his pain and his aloneness without regret?”

After all that, the blues began to lift when I asked to be moved from an office in which I was by myself on the top floor of the building to one I shared with three other people.

I still had to be vigilant when the annual blues came knocking, usually in summer, but I had developed my strategies and tactics to keep them at bay.

Today I still make lists of things to do if I find myself in a low mood but mostly I just accept it’s there and will pass.

And after all this time, I still have a quote from Gibran where I can see it when I write a journal every morning. Referring to joy and sorrow he says that “when one sits alone with you at your board, remember that the other is asleep upon your bed”.

And I’m glad to report that a search on librariesireland.ie confirms that lots of public libraries have The Prophet on their shelves.