Cycling the Border: ‘Unhindered, unchecked, unharmed; I cycle past the post’

‘I hop over seven Border crossings – how long will it take if I had to stop at every one?’ 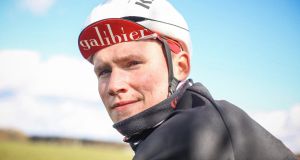 Sheep bleat, as the rain tumbles down. My journey around the Northern Irish Border must go on.

Swapping blankets for bib-tights, I slip out of Pettigo’s haunted school. Breakfast can come later: the rest of the house still sleeps; I have no plans to wake it.

Out the door and down the hill, I follow the Termon River as it meanders through Pettigo village. The Northern Irish Border slices the village in two, with one side Ireland, the other, the United Kingdom of Great Britain and Northern Ireland: a mouthful signified by a crow’s foot on the village’s main bridge, connecting the two countries.

I hurtle through; the temperature bites, the rain doesn’t stop. Curled up in a bed 30 minutes ago, now I’m cycling. My hungry body shivers, struggling to adapt. Feet squelch as tyres shovel rainwater into shoes. Lungs wheeze, struggling to generate energy to keep the adventure going. Slumping up the climb, I’m slow and sluggish, but Belleek will cease the bleakness. An Irish fry and a cosy café will cease the rainfall, start my smiles, and help me on my way.

An hour struggles on, 10 miles have been toiled: not the progress I was hoping for. It’s 9am and I arrive in Belleek. Nothing is open, but an empty coffee shop. Abandoning my bike, I hop in for shelter and recovery.

The heating is broken in the tiled cafe.

I still sit there jittering, wondering whether smiles will ever return. Coffee is guzzled, potato bread crumbles, bacon is torn, energy is born. Cash is deposited and I’m out of Belleek. The sun, I must seek.

I turn onto the Lough Shore Road.

A tailwind on my back, Lough Erne lies to the left. Legs stretch out and wheels whirl faster. Time on the road lengthens. Clouds soften, skies brighten, rain lessens. There is peace.

Home to a hard border, a heavily targeted one at that, the customs checkpoint was besieged 21 times, in the form of bombs, shootings and violence. Belleek, now a place for tourists, pottery, or both, was a militarised battlefield, with men, women and children scared to leave their own homes.

Now, 48 years on, I am not scared. I am not threatened. I am better than that: I am oblivious. Unhindered, unchecked, unharmed; I cycle past the post. Between wild weather and hefty winds, I cannot help but feel proud of the progress my homeland has made to make my lifetime so much safer.

We have overcome burdens in a world of television and internet, allowing allies to look on our ways and help us with them. Northern Ireland has no plans on turning back to these times, but simpler, more pedantic problems may return . . .

Blue Clay. Not the chosen material for Belleek Pottery, but the remedy made at the hands of the stable boy. It’s a mad poultice of turquoise, greens and blues. You own horses, you know its power. Spinach to Popeye is blue clay to a horse. You can’t feed it Lucozade to go 33 per cent longer, but you can soothe its joints. Your horse has to perform; so you bring Blue Clay everywhere.

Even across the Border.

In jeep and trailer, you give a nervy rendition of your Blue Clay analogy out of the window. But this isn’t an intellectual Irish Times reader, this is a customs officer. All they can see is a bomb-making Play-Doh chucked in a fertiliser bag.

They get you out of the car, pat down your prize horse in the back, listen to your analogy again and you’re on your way. With a soft border, you reach the same end goal of keeping your prize gault, but on that hard border, you’ll never get those 45 minutes back.

Arriving in Armagh, I’ve covered 93 miles over six hours; hopping over seven Border crossings. How long will it take if I were to stop at every single one of them?

Airborne coronavirus: What you should do now to help yourself stay safe
9