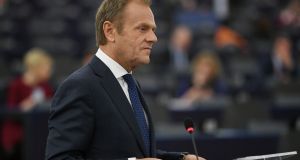 President of the European Council, Donald Tusk, at the European Parliament in Strasbourg, France on March 27th, 2019. Photograph: Patrick Seeger/EPA

The head of the European Council Donald Tusk has urged the European Parliament to be open to a long Brexit extension and not to ignore the “increasing majority” of British people who wanted to remain in the European Union.

But the EU’s chief executive also warned that British intentions were unclear and that the country had become more mysterious than mythological sphinxes guarding ancient tombs.

EU leaders granted Britain a short extension to Brexit last week, saying that, if Britain’s parliament did not back the divorce deal this week, then the UK government would have to indicate what it wished to do before April 12th.

Mr Tusk called April 12th the “new cliff-edge date” and that Britain still had a choice between a deal, no deal, a long extension or the revoking of Article 50, Britain’s notification that it plans to leave the European Union.

“You cannot betray the six million people who signed the petition to revoke Article 50, the one million people who marched for a People’s Vote, or the increasing majority of people who want to remain in the European Union,” said Donald Tusk, who chairs summits of EU leaders, told the parliament.

In a tweet released just after his short speech, he added that the parliament should be open to a long extension if Britain wished to rethink its strategy.

European Commission President Jean-Claude Juncker told lawmakers that it was unclear how Brexit would unfold.

“I told some of you that if you compare Great Britain to a sphinx then the sphinx would seem to me an open book. We will see in the course of this week how this book will speak,” he said.

Britons wanting to stay in the European Union might not be sufficiently represented by Britain’s parliament, but they should feel they were represented by the EU assembly, he said.

Belgian liberal Guy Verhofstadt, the EU parliament’s Brexit coordinator, said that he hoped giving Britain time until mid-April would allow a majority to emerge for a softer Brexit, adding that he believed that Britain would eventually return to the European Union.

The Scottish National Party’s Alyn Smith said every party in Scotland, except the Conservatives, were united in the view that “the best Brexit is no Brexit”.

But British eurosceptic Nigel Farage urged the parliament not to extend Article 50 any further, saying Brexit would otherwise dominate EU business to the exclusion of other topics.

“Do you really want Britain to contest the European elections, to send back a very large number of leave MEPs just at a time when you are fighting populist as you see it across the continent? Do you really want me back in this place?” he asked.