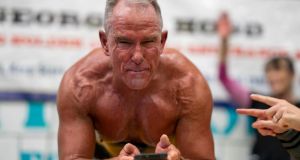 Eight hours is a long time to do anything, especially with your face hovering 20cm from the floor of a gym, but the benefits of a good plank go a very long way. “The plank is excellent because it’s all about stability,” says Chris Magee, the head of yoga at Psycle London, and a former personal trainer, rugby player and martial artist. “That’s key to an active, healthy lifestyle. You want to feel – when you’re walking around, running around or even sitting down – that your spine is strong and protected.”

With a good core, you’d imagine, comes a cut six-pack; the sort of Brad-Pitt-in-Fight-Club abs we’ve all dreamed of. But that’s just surface level, with the real money coming from working those deeper muscles, the ones you can’t see.

To reclaim his world record, Hood spent the past 18 months training seven hours a day. “I do 700 push-ups a day, 2,000 sit-ups a day in sets of 100, and 500 leg squats a day,” he told CNN. “For upper body and the arms I do approximately 300 arm curls a day,” he added, explaining that he uses loud rock music – Rammstein are a favourite – to help push through the pain, while the torn skin on his elbows is manageable once the rest of his arm has gone numb.

If you’re an experienced planker, it’s your prerogative if you want to go in quite as hard as Hood, but Magee estimates that even beginners can improve easily if the technique is right.

“With a plank,” says Magee, “you’re engaging your pelvis and shoulders, your back and the big muscles in your legs, firing them up to ensure that they’re perfectly still. It’s an accumulative exercise, working every part of your body. Even if you’re only holding one for 30 seconds a few times a day, every day, you’re going to start improving pretty quickly.”

Adding 10 seconds to your holds each day is a good way to ensure steady progression. It sounds easy, but, for a simple exercise – get on the floor and don’t move – plenty can go wrong, and part of the reason we mess up is because of that simplicity.

“Some people seem to gloss over it,” says Magee. “If you really run through the checklist of all the things you have to get right within a plank movement, you should be squeezing and shaking really hard.”

You don’t have to lock it in for eight hours a day, but if you’re finishing a plank with ease, then something’s wrong. The plank should haunt you. It’s something you should feel – sorry – at your very core. – Guardian