The best rock and pop concerts in Ireland in 2020 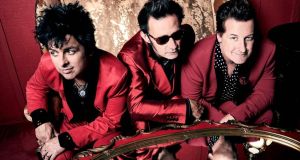 All gigs in Dublin unless otherwise stated. At the time of our deadlines, there was no news of Irish dates for scheduled 2020 world tours by Billie Eilish (embarking on her debut stadium tour), Taylor Swift, and Alanis Morissette (celebrating 25 years of Jagged Little Pill).

(1st) Isobel Campbell, Liberty Hall Theatre. Highly rated Scottish singer performs tracks off her forthcoming album, There Is No Other.

(10th) Tenacious D, 3Arena. Actor/comedian Jack Black and the other bloke get back to juvenile basics.

(29th) Gavin James, 3Arena. Check the date, ladies – yes, it’s a Leap Year gig from the writer of many a tearjerker.

(3rd) An Evening with Whitney Houston, Bord Gais Energy Theatre. Is that a hologram I see before me? Yep, along with troupes of in-the-flesh musicians, singers and dancers.

(8th/9th) Lewis Capaldi, 3Arena. Scottish singer-songwriter and purveyor of heartfelt tunes. God, we love him over here, as these sold-out shows confirm.

(10th) Halsey, 3Arena. American electro-pop singer unafraid to mess around with styles. That’s music, by the way, not Harry.

(28th/29th) Elbow, 3Arena/Waterfront, Belfast. Mature rock/prog-pop for mature people. You have a problem with that?

(29th) Santana, 3Arena. Guitar bliss from a guitar God - just for you.

(5th) Pussycat Dolls, 3Arena. The US group’s first Irish date in ten years. You can’t wait, can you?

(10th) Paul Heaton & Jacqui Abbot, 3Arena. UK singers and songwriters in their own right, as well as providers of some very fine Beautiful South tunes.

(19th) Harry Styles, 3Arena. A rare thing, if not a virtually extinct species – a natural pop star. The show is sold out, as if you didn’t know.

(22nd) Simple Minds, 3Arena. Scottish band deliver 40 years of hits. Has it really been that long?

(29th) Nick Mason’s Saucerful of Secrets, Dublin Convention Centre. A must for Pink Floyd fans – the pre-Dark Side of the Moon years unveiled by original member, Mason.

(31st-1st) Damon Albarn, NCH. As part of the venue’s Perspectives Series, the occasional Blur singer presents his latest music project, The Nearer the Fountain, More Pure the Stream Flows, which is inspired by the landscapes of Iceland.

(6th/8th) The National, Botanic Gardens, Belfast. Intense, edgy but eminently tuneful US band – they are friends of Ireland and we of them.

(6th) Lionel Richie, St Anne’s Park. An open-air gig, so there’ll be no dancing on the ceiling at this one, d’y’hear me now?

(7th) Sinead O’Connor, Botanic Gardens, Belfast. She is back with a bang, and we’re good with that.

(7th) Duran Duran, St Anne’s Park. The ever-ready Durannies are back in Ireland – lock up your mothers!

(26th-27th) Fever Pitch, Galway Airport. Another new music festival for the West of Ireland. Confirmed headliners are The Kooks, with many more acts to be announced.

(29th) Green Day/Fall Out Boy/Weezer, RDS Arena. Three US punk/pop bands for the price of one – all of your pogo dreams have come true, right?

Ready to go in 2020 but as yet not scheduled for dates are albums by Dua Lipa, The Killers, Rihanna, Drake, Adele, Vince Staples, Childish Gambino, Coldplay, and loads more.

(3rd) The Monkees: The Mike and Mickey Show
(10th) Gerry Cinnamon: The Bonny