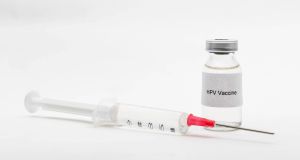 The vaccination of boys will help to reduce the incidence of HPV and, it is hoped, ‘eliminate those cancer-causing types of HPV over time’. Photograph: iStock

What children are offered the HPV vaccine?

Since last autumn, when boys were included in the national HPV immunisation programme for the first time, it is all first-year pupils in secondary schools. Also, their age-equivalent peers in special schools and/or being home-schooled.

Firstly, to try to ensure they have maximum protection from the virus before any likely exposure through skin-to-skin contact in sexual activity. But it has also been shown, as the director of the HSE’s National Immunisation Office, Dr Lucy Jessop explains, that between the ages of nine and 15 the immune system responds better to the vaccine. This means you only need two doses at that age, whereas over 15, three doses are required.

HPV causes cervical cancer, so what’s it to do with boys?

While that is the most common cancer associated with HPV, it can also cause other cancers, such as those of the mouth and throat, anus and penis. It is also responsible for nine out of 10 cases of genital warts in both genders. The vaccination of boys will help to reduce the incidence of HPV, giving better protection to the whole population and, it is hoped, “more or less eliminate those cancer-causing types of HPV over time,” says Jessop. There has been a sharp decline in the number of reported cases of genital warts in young people since the start of the national HPV immunisation programme for girls.

How is the vaccine administered to first-year pupils?

In two injected doses, at least five months apart, through two visits by HSE public health teams to the schools. Or, in some areas, students may be called to the local health clinic to be injected. The second half of the 2019/20 vaccination programme started the week beginning February 24th.

What about possible side-effects?

“There is no evidence of long-term side-effects at all,” says Jessop. “The short-term side-effects would be the same you’d expect from any vaccine – a sore arm, a bit of redness, maybe feeling a bit under the weather for a short time.”

Do parents need to sign another consent form for the second dose?

No, consent forms signed last autumn cover both. They also included your child getting a tetanus, diphtheria and whooping cough booster, along with the first dose of HPV vaccine.  With the second dose, they will also get the new MenACWY vaccine, which gives wider protection against meningococcal disease than the previous MenC.

My child is in first year and I never saw a consent form. Does that mean my child wasn’t vaccinated?

Yes, I am afraid it does, as no vaccine would be given without a signed form being returned. If you never saw a form, it might have gone astray in your child’s schoolbag. Talk to your son or daughter immediately if they haven’t said anything up to now, because they would have hardly been unaware of their classmates going for the injections last time.

But I want that child to be vaccinated, so what do I do now?

Go on to hse.ie, find details of the local health office in your child’s school area and ask for another consent form. If you return that immediately, your child should be able to join the programme now and get the first dose this time around and the second at a later date.

I have an older boy who I would also like to be vaccinated. Is there a ‘catch-up’ programme as there is for the girls?

No. Hiqa, which recommended extending the HPV vaccination programme to boys, did not consider a catch-up scheme for boys “a cost-effective option”. So, your only option for an older boy is to get it through a GP privately – and if he’s over 15, he will need three doses. But if it was an older daughter who missed out for some reason, they can still get it free through the HSE if they are still at school. Contact your local school vaccination team.

What types of HPV does the vaccine protect against?

The vaccine being used for the first time in the 2019-20 programme is HPV9 and covers, as the name suggests, nine different types of HPV and gives wider protection than the HPV4 that was used before. In addition to covering two of the viruses that cause about 90 per cent of genital warts, it provides protection against seven cancer-causing strains. HPV vaccines were first licensed in 2006 and indications are that they offer lifelong protection.

If about 80 per cent of people are exposed to HPV, what determines who will suffer ill-effects?

“We don’t know who is susceptible,” says Jessop. In most cases, people’s immune system will clear the virus from their bodies; in others, it may hide and evade the immune system. Those infected may not know they have it and there is no “cure” – it can only be prevented, through immunisation before exposure.

“You may not have visible genital warts, but HPV might still be in your skin and you could pass it on,” she explains. Through the latest research data, she adds, “we estimate now that about one in 20 cancers across the world is caused by HPV”.

Read
- It affects your nervous system, your brain, your thought process
- Every day I wish I could have availed of the vaccine

Carry on trading: The businesses working hard to keep us fed, and workers paid
5