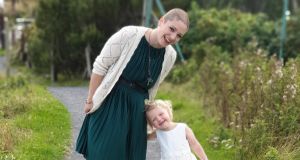 Geraldine Walsh and her daughter.

Hitting motherhood in my early 30s somewhat changed the opinion I had of my body in my 20s. It was not exactly a positive image. I am petite so have always been critical and somewhat defensive of my body and short stature.

At the time, I was unbearably thin and struggled to maintain a decent weight despite having a healthy but somewhat indulgent appetite. Childbearing hips were non-existent. I looked about 12 and felt patronised. It was, in so many ways, as though I legitimately could not measure up. My relationship with my body was on the poor side. I wanted it to be different but couldn’t do anything to change it. I was defeatist in believing I could be beautiful because I was so effortlessly tiny, and vowed to be hidden.

Having children changed much of how I see myself. In the beginning, it was a sideways shift considering I was verging on empirical hatred of the changes pregnancy and early motherhood made on what seemed like every inch of my being.

There I stood, facing this new body in the mirror, hating the changes to my skin, my inability to lose the weight from my no longer pregnant belly, and feeling like the C-section scar was more than the war wound they said it would be. It was more like adulterated damage to the destroyed body I didn’t recognise.

This may sound harsh, but pregnancy does a lot of strange things to your body. It feels foreign and unnatural. My usual hang-ups, which were ingrained by my 20-something-year-old mind, were now contaminated by these distorted extras.

By my second child, the body positivity movement had really kicked into gear and was less about being a larger size than the fashion industry’s standard, and more about everyone, no matter their background, loving and appreciating the skin they are in. Here I was, being told all these differences were okay and to embrace the changes my body had experienced because it had created two truly remarkable humans.

But I remained judgmental.

Dr Jonathan Pointer, chartered clinical psychologist and psychotherapist (Therapy Sanctuary), says: “Being critical of our bodies is not a helpful position to take because it can negatively affect our mood, reduce our self-esteem, and lead us to adopt unhelpful behaviours, such as avoiding situations in which we feel most exposed, as well as playing a part in the development of eating disorders.

“The body positive position attempts to fight our internalised critical voice, but it, too, can lead us to become overly focused on our body image. In some cases, this can add another level of distress, when people become critical of themselves for any perceived lapses in their concerted efforts to be consistently body positive.”

The self-love movement has been a strong player on social media, encouraging us to harness the ability to admire our bodies despite us often feeling like it hates us. We know being caught up in loathing aspects of our bodies – although a somewhat common experience these days – encourages shame, stigmatises the more vulnerable, fosters bullying and limits our ability to fight the unrealistic images we envy and desire, such as bouncing back after pregnancy. I did not bounce. I fell.

In fighting the challenges of the idealistic standards of female beauty, body-shaming has been shown to increase depression and anxiety and create a risk of eating disorders such as anorexia nervosa, bulimia nervosa and body dysmorphia.

The last decade has witnessed a surge in advocates who encourage us to stop this hatred, accept and appreciate who we are. It’s a desirable place to be and a wonderful attitude to have. But it’s not always as simple as saying, my body is actually okay.

My own lack of body confidence has been damaging, as those internal conversations sing a negative bias. I have had plenty of shouting matches with my thighs, acne, and again my 5ft nothing-ness. I would love to say that the body positivity movement had an eye-opening effect on me, but it took me quite some time to recognise that these changes brought about by pregnancy and motherhood were in fact liberating.

At times, I feel empowered by how the unique idiosyncrasies of my body add up to make it what it is. And at times, I am guided to a new kind of self-esteem and confidence as motherhood stamps herself on my proud body. But then I feel awkward about it all yet again. My 20-something self, taking hold.

I remain critical of my body but it’s a fluctuating argument depending on my mood and perhaps the lighting. I may never fully embrace my imperfections, but I know it’s okay to have them.

I have accepted my body for what it is. A potentially evolving dynamic considering I can never own the body I had in my 20s, not that I necessarily would want to, but it wasn’t as scarred or blemished; and surely the body I have in my 30s will have changed by the time I am rooted in my 40s and those scars and blemishes may have faded or have less significance. And this is where body neutrality has developed from.

Dr Pointer explains: “The concept of body neutrality focuses on the position of developing acceptance towards our bodies and developing a relationship of gratitude toward our bodies for what they do for us. The body neutrality position is similar to that adopted by acceptance and commitment therapy which is itself derived from Buddhist psychology, whereby we learn to perceive our thoughts and feelings as just mental events, which we neither need to overly identity with nor avoid. They are simply just there, and instead we commit to our intrinsic values, such as living compassionate lives.”

The body positivity movement has been somewhat of a success with limited acceptance from the industries we need to adjust to these changes. Our idea of beauty is diverse, whereas in the industry, sex still sells. Veering from body positivity to the new direction of body neutrality has been a welcome amendment to how we see ourselves.

This has been ground-breaking because of the effect it has on our minds. Liberating us from an inaccessible ideal once our thought patterns can be adjusted away from industry standard. Because none of us have stepped off the conveyer belt and walked off the production line.

Body Confidence
Part 1: After serious illness or injury
Part 2: Our idea of beauty is diverse

Do you smoke or vape? Here’s why Covid-19 means you should quit right now
8