For runners, is 4.5m the new 2m for social distancing?

When we run, air moves differently around us, increasing minimum social-distancing space 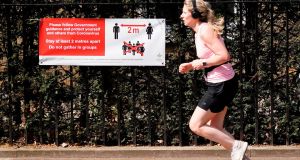 A jogger runs past a sign telling people to adhere to social distancing guidelines, and stay 2m apart, in London. Photograph: Niklas Halle’n/AFP via Getty Images

It may be a good idea to give one another more than two metres (6ft) of space while exercising outside during the current coronavirus pandemic, according to a compelling new study that looked at how air flows around bodies in motion.

The study has not yet been published in a peer-reviewed journal, and the results need further confirmation. But they indicate that runners and brisk walkers may create a wake of air behind them that could carry exhaled respiratory droplets for 4.5m (15ft) or more, meaning that the droplets could reach people walking or jogging well behind them.

The findings, released this month as a brief white paper and accompanying series of animations, have been shared widely on social media and prompted some trepidation among people who worried that sharing the outdoors with other exercisers, especially runners, raises infection risk. But the study, which has now been posted in full online, did not look at coronavirus particles specifically or how they are carried in respiratory droplets in real-life conditions. Nor does it prove or even suggest that infection risks rise if you do wind up temporarily strolling behind a panting runner.

Still, its calculations make sense. It finds that when we walk or run, the air moves differently around us than when we are still and the best way to maintain a proper social distance in that situation is to avoid slipstreams, the currents of air that follow a moving body.

By now, we all are achingly familiar with social distancing, which mandates that we stay at least 2m (6ft) apart during the pandemic. This edict is based on studies and models showing that exhaled droplets capable of carrying the coronavirus rarely travel as far as 2m. But that research generally looked at quiet air and immobile people. Little has been known about what happens when people are moving.

So, in the past few weeks, Bert Blocken, who studies fluid dynamics, decided to model air flow between and around active people. Blocken, a professor of civil engineering with dual appointments at Eindhoven University of Technology in the Netherlands and KU Leuven in Belgium, had created past computational models of drafting while cycling and the flight paths of viruses as they drift through inadequately ventilated buildings.

For the new modelling study, he and his colleagues thought they would combine those two research interests to compute the “aerodynamically equivalent social distance” needed during exercise. That term, which they invented, refers to how far apart people should remain while running or walking to have about the same potential exposure to droplets as if they were seated or standing about 2m apart.

To find those equivalencies, they combined results from several already-completed models, one of which computed the paths of respiratory droplets of various sizes, using droplet data gathered after the SARS epidemic in 2003. This model approximated how far vapour droplets generated during normal breathing would be pushed by air moving at various speeds. The second model calculated air flow around and behind a lean 6ft runner moving at a pace of about 6 minutes 40 seconds per mile or walking at a leisurely 4km/h.

They then mathematically determined what might happen to respiratory droplets exhaled by that theoretical runner or walker, based on how air displaced around him.

They found that, in their model, most droplets swirled directly into the wake of air following that runner and were pulled along in his slipstream long enough that the aerodynamically equivalent social distance – the distance he should remain separated from those behind him to achieve relatively low droplet concentrations – was almost 9m (30ft).

The equivalent social distance during brisk walking was about 4.5m (15ft), the researchers also calculated.

Interestingly, they noted little side-to-side flow of air droplets in their model or spillage outside of the athlete’s slipstream. The respiratory droplets clustered in the long, narrow corridor of the athlete’s wake, which was about the width of his shoulders.

The implication of these findings, Blocken said, is that to keep social distance, runners and walkers should swing well wide when passing other people and not cut back sharply in front of them after passing. “Be nice and wait awhile before you move back in front of anyone,” Blocken told me, preferably spacing yourself at least 4.5m or more in front.

Similarly, if you find yourself behind someone while walking or jogging, move to the side until that leading person’s body no longer blocks your view, which should situate you outside his or her slipstream, Blocken said.

Bear in mind, though, that this study has considerable limits. It looked at one size of athlete and at the behaviour of relatively large respiratory droplets, not the smaller aerosolised type that might linger in the air longer. It also did not include simulations of athletes wearing masks or of the effects of wind. Above all, it did not consider whether respiratory droplets from its imaginary runner contained coronavirus and so cannot tell us whether running or walking closely behind someone increases your risk of being exposed to dangerous germs, only that it increases your risk of being exposed to someone else’s breath.

Reassuringly, “there is no empirical evidence that runners or bikers are a point source of infection,” said Dr Dean Winslow, a professor of medicine at Stanford University and an infectious disease specialist, who reviewed the new modelling study at my request.

The study also remains unpublished or peer-reviewed. “But the results look reasonable,” said Linsey Marr, a professor at Virginia Tech who studies air flow and also reviewed the study for me. “Common sense, and this study, suggest that if someone is walking or running, we need to allow for more space around them” than if we are together but still.

Blocken said that he planned to submit the study for publication consideration soon and complete a companion study of social distancing equivalents for cyclists. In the meantime, he and his colleagues have posted a detailed Q&A in response to the many social media comments. It is online as a PDF here. – New York Times