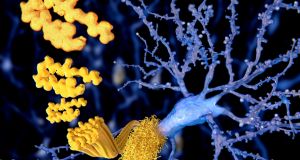 In Alzheimer’s disease, it’s thought the brain’s ability to remove amyloid beta becomes impaired, and the amyloid beta builds up in a soluble form in the fluid of the brain. Photograph: iStock

Amyloid beta has a bad rap in Alzheimer’s disease. It’s a sticky accumulation of proteins that forms clumps or plaques inside the brains of people with the condition: the build-up of plaques was one of the original changes in the brain that German physician Alois Alzheimer spotted more than a century ago in post-mortems of patients.

Yet much remains unknown about amyloid beta in Alzheimer’s disease. The focus of research has often been on the visible build-up in the space between types of brain cells called neurons.

This space, the synapse, is an important structure that allows these brain cells to communicate with each other and to pass information from one part of the brain to another. If the synapse can’t work properly, as is thought to happen when amyloid beta builds up, it’s not good news for those connections in the brain.

It’s not that simple though, and a new study carried out between Dublin City University and a research centre in Germany is taking a broader perspective on beta-amyloid, which the researchers claim brings many jigsaw pieces together.

Not always a villain

Amyloid is an aggregate of protein fragments that can build up in different parts of the body, not only the brain, explains Prof Saak V Ovsepian, a neuroscientist at the the Institute of Biological and Medical Imaging at the German Research Center for Environmental Health in Munich, Germany.

“Amyloid can accumulate in the kidney and liver and other organs,” he says. “In the brain, the type of amyloid that is linked with Alzheimer’s is an aggregate of amyloid beta.”

So what goes awry in Alzheimer’s disease? It’s thought the brain’s ability to remove amyloid beta becomes impaired, and the amyloid beta builds up in a soluble form in the fluid of the brain and also as clumps between brain cells.

“The clearance of amyloid beta in the brain becomes impaired,” says Ovsepian, who is an adjunct professor at the Faculty of Science and Health in DCU. “For unknown reasons, the amyloid beta then hangs around then in the interstitial fluid [in between brain cells] where it is very toxic – it causes a lot of damage, and some of the amyloid beta aggregates into plaques.”

While he was based at DCU and working with Prof Oliver Dolly, Ovsepian explored how amyloid beta moves in and out of brain cells called neurons.

“One of the most interesting issues we saw was that when there is a lot of amyloid beta outside neurons, the amyloid beta gets brought into the brain cells, and this can damage the cells,” he explains.

This process could underlie the type of changes seen early in Alzheimer’s disease, according to Ovsepian. “We know that a type of brain cell called cholinergic neurons die early in the disease process,” he says. “These cholinergic neurons act as a clearing engine for amyloid, and if these cells are damaged and die, that means the brain loses that mechanism of removing amyloid beta and the build-up situation becomes worse.”

Ovsepian and Dolly recently published a paper in the journal Alzheimer’s & Dementia that gives an overview of how amyloid is processed and moves in and out of neurons, particularly at the synapse, where the tips of neurons communicate.

“The synapse produces amyloid beta and then too much amyloid beta poisons it,” says Ovsepian. “We looked at how the amyloid beta is regulated and processed and moved around at this critical juncture. It unifies a lot of things that were disjointed. Our study integrates them, it looks at how the parts of the jigsaw fit into the story.”

This wider perspective could potentially point to new ways to intervene in the build-up of amyloid beta. “If we look inside the cells, there are many molecules that amyloid beta interacts with, these could be targets for us. In no way have we developed a magic bullet here, but we are pointing to a lot of molecules that perhaps had previously been ignored.”

Dolly, who is professor of neurotherapeutics at DCU, is particularly interested in how the amyloid beta binds to particular molecules inside the cells and interrupts the normal trafficking of substances around and out of the brain cells.

“Lots of people are looking at the amyloid beta plaques that build up between cells, trying to develop treatments that target them and break them down,” he says. “We are looking at what happens on the journey to amyloid beta build-up. If you could interfere with that process, a lot of people would be interested in that.”

He stresses though, that the insights currently relate more to the development of the disease. “[Amyloid beta] binds to proteins that are responsible for the neuronal release of transmitter substances, a process essential for communication in the nervous system,” he says. “As such interactions could perturb this normal functioning, our ideas suggest a basis for some symptoms of Alzheimer’s disease rather than a successful treatment.”

54 Irish curses you won't have learned in school
4

Lockdown letters: ‘Life is all about making connections’
6

What if ‘herd immunity’ to coronavirus is closer than scientists thought?
Real news has value SUBSCRIBE