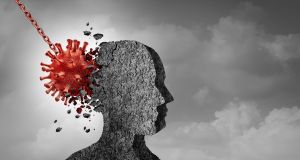 Multiple groups have sprung up online to support people experiencing unusually long recovery from ‘mild’ or ‘moderate’ Covid-19 and many of their members report being continually dismissed by health professionals. Photograph: iStock

On St Patrick’s Day 2020, after a weekend on call, Linn Järte, an outdoorsy, 33-year-old doctor, developed flu-like symptoms. After two weeks in bed she returned to work in ICU at the hospital where she is a junior anaesthetist. A month later, Järte developed profound fatigue, and brain fog, including memory loss and difficulty finding words.

Five months after her first symptoms, she remains mainly bedbound. “This has taken almost everything that is me away from me. I’m completely unable to carry out my profession.”

Like the thousands of others who continue to experience debilitating cognitive dysfunction associated with long-Covid, Järte is fearful that her brain will never return to normal.

Despite being gaslighted by a doctor, and struggling to access specialist care, her mental health is holding up thanks to an online support network of long-haulers. The ‘Long-Covid Support Group’ on Facebook was set up by Claire Hastie to help people whose lingering symptoms prevent them not only from returning to work, but also from carrying out the simplest of daily routines without relapse. Barbara Melville, one of the group’s administrators, says that only a small proportion of the group’s 19,000 international members were hospitalised. Some of the remainder had a positive test, but many were not testing, and simply stayed at home and self-isolated. This was based on the understanding that most people who contract Covid-19 experience mild to moderate respiratory illness and recover within a couple of weeks without requiring treatment.

However, data from a Covid symptom study (Harvard, Kings College London and Stanford Universities) indicate that one in 10 people experience prolonged post-viral effects. That translates to at least 2.5 million people globally, a figure that does not take account of those who contracted the virus, but were never tested. Globally, efforts have appropriately focused on testing, tracing and saving lives with research funding going to vaccine research. But the long-term effects of infection with Sars-CoV-2 cannot be ignored, and may be significant.

Caroline O’Brien, a public health nurse who tested positive in March, is keen to return to work, but her three attempts so far have been scuppered by relapses. “You just don’t know what’s going to hit you next. Sometimes for me it comes in like a tsunami. I could be fine for two days and then it hits me,” she explains. “I feel like I’ve been run over by a train and with that comes my brain fog.”

Brain fog comes in waves lasting days or weeks for a University of Cambridge researcher who wishes to remain anonymous. The researcher, in her 30s, has started three small kitchen fires as a consequence of her now “rubbish memory”.

“Brain fog more than any other long-Covid symptom is what is stopping me from being able to return to work,” she says. “Getting stuck with it is what scares me the most about long-Covid and I’ve had some nasty heart and lung complications.”

It’s not known yet how Covid-19 brain complications occur, but prime suspects include, either individually or in combination: direct injury from the virus itself; low oxygen levels; high temperature; blood clots; hyperinflammation; inflammatory or immune disorders occurring in parallel with, or post-Covid-19 and sepsis.

NHS intensive care doctor Dr Ron Daniels sees a lot of commonalities between post-Covid recovery and post-sepsis recovery. He says that “this condition looks a lot like sepsis at a clinical level”. Both Covid-19 and sepsis share symptoms including breathlessness, fever spikes and muscle pain, and both trigger a disproportionate immune response. We’ve been looking after people who have survived sepsis for many, many years and we broadly describe their after effects in three domains: psychological, physical and cognitive. The brain fog described by the long-Covid groups really closely mimics the after effects of sepsis as a consequence of bacterial infection.”

In his capacity as executive director of the UK Sepsis Trust (UKST), Dr Daniels has been working with the Long-Covid Support Group to help long-haulers. He has established a Covid-19 patient support programme that includes recovery and return to work guides.

Dr Patricia McNamara is a consultant neurologist at the National Hospital of Neurology and Neurosurgery in London. “Any severe systemic illness will impact on cognition,” she says.

“I’ve spoken to a number of patients in clinic who’ve said it’s taken two to three months to fully recover and feel back to themselves, ie feeling a little more normal. But they’re still having fatigue and brain fog. These cognitive complications often last for a few months afterwards. It does take quite a long time and that’s very difficult. Particularly if people are very high performing, they’re used to being able to do things very easily and quickly. It’s a huge adjustment then, to have to pace themselves and not be able to do multiple hours of work.”

The Irish woman says that they haven’t characterised Covid-19 brain fog very well. They hope to set up a service to support patients with neurological complications, but she says: “We need more research, we need to follow them to see what happens longer term.” Cognitive neuroscientist Dr Adrian Owen’s Covid-19 Brain Study aims to do just that, by following 50,000 people who experience Covid brain fog.

Dr McNamara is part of a multidisciplinary team (Covid-MDT) that has been meeting weekly since early March to discuss Covid-19 patients with neurological illness across London. While respiratory symptoms are most commonly associated with Covid-19 their clinical data, published in Brain, indicate an association between infection with Sars-CoV-2 and neurological illnesses including: encephalomeningitis (inflammation of the brain and its surrounding membranes), encephalopathy (diffuse brain disease/damage that alters brain function), acute demyelinating encephalomyelitis and stroke.

Prof Joseph Harbison, consultant stroke physician at St James’s Hospital, says while stroke is eight times more likely with Covid-19 compared to influenza, the overall incidence of stroke in Ireland actually went down. The week before lockdown the number of strokes dropped by 40 per cent from the three-month average, he says. Over the subsequent three months, there was a 15 per cent reduction based on national requests for emergency stroke scans. Prof Harbison suspects this was due to people with mild stroke not presenting at hospital. “About 80 per cent of future strokes are preventable with proper management, but if they never come in we can’t prevent a further one,” he says. His advice for anyone who thinks they may have had a mild stroke is to go see their doctor.

Multiple groups have sprung up online to support people experiencing unusually long recovery from “mild” or “moderate” Covid-19. Many members report being continually dismissed by health professionals. When 27-year-old Victoria Phan spoke to her doctors about her brain fog, she says they “laughed at me and gaslighted me saying it was due to my anxiety.”

Vanessa Bassoli (51) feels that her brain fog is getting progressively worse. She has found none of the doctors she has spoken to helpful. She says one doctor put her symptoms down to menopause.

While Bassoli appreciates that doctors don’t know what to do, she wants to be listened to and believed. “I want them to acknowledge long-Covid is real, it’s not in my head. There are thousands of us all suffering with the same symptoms. Many of us have been ill since March and have the same pattern of relapses. We can’t all be making it up.”

– Sabina Brennan hosts the Super Brain Podcast, and has a special episode here.