Covid-19: Sport in Ireland linked to at least 55 cases in August

Those who have been infected have had 365 close contacts, according to health watchdog 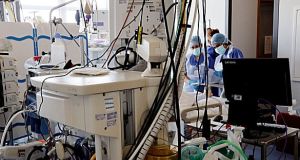 The Health Protection Surveillance Centre says those who have been infected have had 365 close contacts, with each case generating an average of 6.6 close contacts. File photograph: The Irish Times

At least 55 cases of Covid-19 in August have been linked to some form of sporting activity, the Department of Health has said.

The Health Protection Surveillance Centre, which monitors outbreaks of the virus, says those who have been infected have had 365 close contacts, with each case generating an average of 6.6 close contacts.

Public health officials last night ruled out any immediate lifting of the ban on spectators at sporting events, which was imposed in mid-August. Acting chief medical officer Dr Ronan Glynn said the focus for now was on making the reopening of schools work over the next few weeks, after which other measures would be examined.

The GAA, which believes the measure will force spectators indoors to more risky environments, has asked officials to present the underlying evidence.

Although no meeting has taken place between the GAA and the National Public Health Emergency Team, Dr Glynn said he was happy to meet all sporting bodies.

Meanwhile, Cabinet is expected today to sign off on a plan to supply free flu vaccines to more than two million people.

However, the delivery to Ireland of flu jabs is being delayed due to problems relating to Covid-19.

Doses for 1.4 million adults will be made available from mid-September. For the first time, a mass vaccination of 600,000 children is planned, but this will not start until mid- to late October, it is understood. This is close to the recommended timeline of within two weeks of the annual flu season.

With 30.6 cases per 100,000 population over the last fortnight, the incidence of the disease in Ireland is up to 12 times higher than it was two months ago, according to figures from the European Centre for Disease Control.

However, Dr Glynn denied that public health officials had “taken their eye off the ball” and put the surge down to an “explosive” and “unusual” growth in clusters with “significant knock-on effects”.

He admitted there were “some delays” in testing large clusters in Co Kildare but said these issue were being addressed and “lessons have been learned”. Ireland was “there with the best countries in Europe with testing”, he insisted.

The decision was made despite Kildare still having the highest incidence of any county in the Republic, although the trend is downwards.

A further 53 confirmed cases of Covid-19 were reported by public health emergency team on Monday evening, and no new deaths. Dublin accounted for 25 of the new cases and Limerick for 11.

Dr Glynn said it was too early to read anything into the improvement seen in recent days but added that he was heartened by the “apparent stabilisation” in numbers.

Any review of the green list of countries from which travellers do not have to quarantine on arriving in Ireland, is a matter for Government, he said.

The public health emergency team has undertaken an internal review of its operations, according to Dr Glynn, and its role would be reviewed externally as part of the Government’s planned framework for tackling the disease.

The US yesterday surpassed six million cases of Covid-19, including one million new infections in the past month.