Coronavirus: ‘I don’t really appreciate those who glibly say the danger is overstated’ 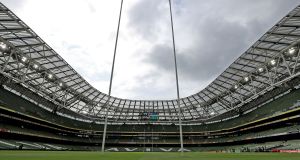 I don’t really appreciate those who glibly say the danger is being overstated; that cancelling the series of Ireland-Italy rugby games is a step too far. Photograph: Donall Farmer/PA Wire

There is a cohort which sits up and listens every time those words – or Covid-19 – are mentioned.

I am part of that cohort. Because I am one of tens of thousands of people in Ireland living with chronic lung disease. Experts suggest that more than 500,000 people in Ireland suffer from COPD – chronic obstructive pulmonary disease – a chronic inflammatory lung disease that causes obstructed airflow from the lungs.

We have the highest rate of hospital admissions for COPD in the OECD (the Organisation for Economic Co-operation and Development has 36 members) – 17,500 admissions two years ago.

Prof JJ Gilmartin, consultant respiratory physician and chairman of COPD Support Ireland, says the 500,000 figure is likely to be an underestimation.

COPD is progressive. It gets worse, not better, though it can be managed. Since my diagnosis a decade ago, I have had 16 hospital admissions with infections, each requiring intravenous antibiotics. Some have been worse than others. All have added a little bit more in the way of permanent damage to my lungs.

I am on a constant regime of preventive antibiotics and steroids to help with breathing. I am on oxygen 12-14 hours a day. It’s inconvenient. I’m conscious of the tubes crossing my face if I use it in public places, which I rarely do for precisely that reason. But I, like many others, have now reached the stage where one infection could be fatal.

Coronavirus certainly would be.

So we have been warned to be careful, to avoid tight crowds like the ones you might encounter in pubs or at gigs. In my case, that has meant missing six music events for which I had tickets, bought in moments of rash optimism.

So I, we, don’t really appreciate those who glibly say the danger is being overstated; that cancelling the series of Ireland-Italy rugby games is a step too far; that people wearing masks as they go about their business is an over-reaction; that schools are dead right to insist on children who have just returned from infected parts of Italy to continue going to school unless or until they display symptoms; that hysteria has replaced common sense.

Yes, there are idiots who won’t go near Chinatown in London simply because it’s Chinatown. You can’t legislate for stupidity.

But it is less than 20 years since some accused the government of panic when foot and mouth disease gripped Britain. More than 2,000 cases of the disease were reported and more than 6,000,000 cattle and sheep were culled.

There was one outbreak here, in Co Louth. Thousands of sheep and cows were slaughtered. Our Six Nations match against England was postponed. Mass gatherings were cancelled – there was even a suggestion that Mass should be cancelled in the northeast of the country.

We have reduced lung capacity. In my case, only 20 per cent or so of my lungs are functioning. A serious infection would reduce that to zero

There were the usual cries of “panic” and “over-reaction”.

But the measures were effective. They were costly. But the cost of not taking decisive action would have been far greater.

And without meaning to offend, those measures were taken to protect animals and the economy.

For those of us who are vulnerable, a handshake, a door handle touched with an unwashed hand by someone who has the virus, perhaps unaware they do, a cough, a sneeze – anything could cause an infection that, likely as not, would be fatal.

We have reduced lung capacity. In my case, only 20 per cent or so of my lungs are functioning.

A serious infection would reduce that to zero.

Not every infection is likely to be fatal.

But coronavirus, from all the reports, would.

Villa oasis by the Forty Foot in Sandycove for €1.95m
4

Coronavirus: Can we get a caravan park fee refund because of closure?
6

Property market: Is now the time to buy?
8