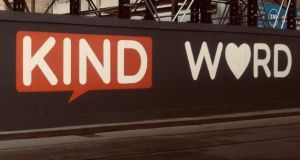 Part of the artwork in Dublin city centre.

A new positive mental health initiative, based on the simple premise that we can change a person’s day with just one word, has appeared in Dublin city centre in the form of street art.

One Kind Word has been brought to life on Middle Abbey Street by Irish artist and activist Will St Leger. The campaign, organised by 3TS (Turn the Tide on Suicide), hopes to promote a more pronounced social consciousness of the power that kindness can have on mental health – including on social media.

“Kindness is a quality that each of us is capable of – we know what it feels like to be kind or how good it feels when someone is kind to us,” said St Leger. “Reaching out to others you may be concerned about, is in itself an act of compassion. Quite often, one small kind word or gesture can evoke a feeling of wellbeing in us all and indeed it might just change someone’s day for the better. At its extreme, we are all familiar with stories of people who have found themselves in suicidal crisis and have been positively impacted by the kindness of strangers. I believe that we’ve managed to communicate this quality of kindness with this installation and I hope that it can serve as some form of inspiration to others.”

The slogan-based artwork faces directly on to the Red Line Luas track at the corner of Liffey Street and Middle Abbey Street on the north side of the city centre and was commissioned by 3Ts, a charity working to help prevent deaths by suicide through research, intervention and support.

Organisers of the timely initiative are hoping people on social media will use the hashtag #onekindword to highlight a kind sentiment that they give or receive during any given day over the coming year.

“Aiming to include even one kind word per day in everyone’s life – that has to amount to something great,” said chairman of 3TS, Noel Smyth.