‘My son is asking me questions I can’t answer’

So many questions posed by a child begin with why, and that’s a beautiful thing 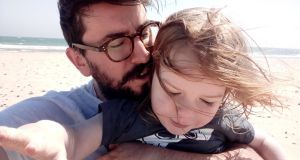 Darragh with his son: When you have a child, you will have to answer more questions than at any other time in your life, but you’ll also be forced to ask them. .

I recently watched a video posted by Chris Packham on Twitter after he discovered a murdered fox dumped outside his house. An ardent anti-foxhunting campaigner, he is despised and vilified by a small cohort of heavy-browed knuckleheads. The video itself is heart-breaking. The dead fox lying at his feet is one of the most beautiful creatures you could ever imagine, brutally killed in some small-minded act of petty intimidation. Packham’s response is one of resignation, as if such a vile crime was to be expected. But he is also compassionate and restrained.

There is a lot to think about when you see a video like this, but my only thought was how could I explain something like that to my son.

He is only three, but my son has already roundhouse-kicked me with some unexpectedly difficult questions. One morning, still in his pyjamas, he asked me sadly, “Where do my dreams go?” Answer that one, Colombo. Suffering from a stomach bug he asked me why it hurts so much. Reading the pain and confusion on his poor little face it wasn’t hard to interpret the question as: Why are you letting this happen to me?

Walking home from Montessori he sees a door in a garden wall. I can understand why he wants to know what it is. It looks out of place, like it belongs inside. I explain that it’s a garden door. A door that leads to a garden. But he wants to know why it’s there.

“A shortcut is . . . it’s a way of getting somewhere quicker than usual.”

It is an answer that clearly leaves us both unsatisfied, and I know we’ll be returning to the idea of shortcuts before long.

How little I understand

There are more difficult questions to come. As he grows and learns more about the world, I will be forced to admit how little I understand it. My son’s curiosity will lay bare my ignorance of the human condition.

I have no idea why people do the things they do, that much is clear. Why someone would want to kill a fox is beyond me. And, let’s face it, that particular outrage sits on the relatively mild end of the scale of human outrages. I should be able to explain why some people choose to do harm, but at the same time I wish I never had to explain it.

I think the reason we stop asking fundamental questions as we grow older isn’t because we lose our curiosity, or that we think we already know the answers, it’s because we know the answers are too difficult to understand. Have you ever met someone who has all the answers? No, I don’t trust them either.

Getting to that sweet core of truth is a difficult thing to do. In fact, it’s nigh on impossible. Long before Socrates started haranguing people in the Agora, we have struggled with questions of the why.

It always starts with a why. Almost all follow-up questions posed by a child begin with why, and that’s a beautiful thing. Ask enough whys and you’ll eventually strip away all the superficial layers of the question to be left with the aforementioned core, irreducible idea.

We become satisfied with the what, but the why is the real question. As adults we try to understand any given situation by considering everything from history and geopolitics to personal experience and prejudice. But, of course, these things don’t exist for a child. And besides, we still often end up asking the wrong questions.

Consider any recent news cycle. A riot in Paris; an election in Ireland. We are told what happened and how it happened, but rarely why it happened. It’s always a more difficult and pertinent question than it initially appears to be. Perhaps each newsroom should double as a Montessori. It could be a two-birds, one-stone solution. Employees get their childcare sorted, and journalists are kept on their toes with an incessant chorus of whys.

This is what having a child does to you. You will have to answer more questions than at any other time in your life, but you’ll also be forced to ask them.

Right now I have one to answer. My curious three-year-old wants to know why magnets stick to the fridge, and I’m fighting a terrible urge to just say magic.

Róisín Ingle: Even Matt Damon has fecked off back home
7

Childcare: ‘So, you go out and take the child kicking and screaming from the car?’
8

Irish in America: Share your views on the protests
9