I don’t want to alarm you, fellow parent, but you are going to lose your mind

Being a stay-at-home parent is the ultimate leveller, so at least you are not alone 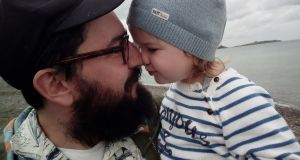 Darragh Geraghty and daughter. The psychological effects of parenthood are very real, he says. ‘I, however, have been shocked by how thoroughly this condition transforms your previously functioning brain into a steamed ham.’

There are a million reasons why someone chooses to be a stay-at-home parent. Maybe you didn’t even have a choice. Maybe you’re on maternity leave and thinking of doing this full-time. Maybe your Montessori just closed down.

Whatever the reason, new or soon-to-be stay-at-home parents ought to know a few things.

First of all, being a stay-at-home parent is the ultimate leveller. It doesn’t matter who you are; when you are trying to comfort a sick baby at 4am with green shit leaking through her nappy, you’re just the same as the rest of us schmucks. That’s the good news. We’re all in this together. No matter how alone you feel – you’re not. All you have to do is talk about it.

Yesterday, I had a conversation with a friend who was giving me advice on baby sleep. Now, usually if someone assumes to advise me on how to get my own baby to sleep, my eyes will glaze over and I’ll get to wondering why Marty McFly’s parents don’t eventually recognise him when he grows up to be the kid who helped them out in high school. But this time the advice was welcome, and I was grateful for it because I knew my friend had gone through the exact same thing I had. Having someone who understands what you’re going through is good for you.

That’s the first and most important thing to remember: you are not alone.

On to the second thing you should know.

I don’t want to alarm you, but this is a big one: you are going to lose your mind.

We should explore this idea by way of a story. A man fills the sink to do the washing-up. He leaves the tap running while he attends to other business about the house. You know how it is. One child discovers the stairs. Another throws a bowl of plums down the toilet. Never a dull moment.

At one point the man hears a hiss. It is an unnatural sound, and he really hears it, but he doesn’t recognise it. At one point he even acknowledges it. In the echoing caverns of his empty brain he thinks: “What the hell is that hissing sound?”

The hiss wasn’t a hiss at all. It was the sound of a billion gallons of hot sudsy water spilling on to the tiles. When he walks back into the kitchen and sees water cascading down every surface, no less spectacular than the colossal Iguazu Falls, utterly flooding the kitchen, his only thought was, “Ohh . . . that was the hissing!” He looks dumbly at the catastrophic damage for about two minutes before starting the eight-month clean-up operation.

Are you sitting down? Because here comes the Shyamalan twist: that man is me.

It sounds bad, and it was bad, but it is not even in my top five brainless things I’ve done since becoming a stay-at-home-dad. One morning, not so long ago, I walked out to the car to find the front door wide open. Not only that, but the keys were in the ignition. I had left the door of our car wide open with the keys in the ignition all night. I was honestly amazed it wasn’t stolen. It probably looked like a trap. Any thief worth his salt would have smelled the swat team hiding in the bushes a mile away.

I can’t give this car away.

The psychological effects of parenthood are universal, well-documented and very real. I, however, have been shocked by how thoroughly this condition transforms your previously functioning brain into a steamed ham. Should I be worried? Possibly, but I’m not. I’m putting all this dunderheadedness down to your run-of-the-mill lack of sleep. I have chosen to believe it is temporary.

Forgetful, ditsy, scatterbrained; all these words are too cutesy, too twee. If you say to someone “I’m so scatterbrained today”, they’ll assume it’s no more than forgetting to put the milk back in the fridge, when in fact you have just brushed your teeth with Domestos and require an emergency stomach pump. I suggest the following sufficiently grave term be adopted by all stay-at-home-parents: acute transitory derangement of the prefrontal cortex.

“I have acute transitory derangement of the prefrontal cortex.”

“Oh my God, is everything okay?”

If everyone is mad, is anyone mad? The answer, of course, is yes. We are all mad, but we are all mad together, and I, for one, take great comfort in that fact.

2:47 Doing the coronavirus rounds with Joe the postman in Dublin 3

The air is filled with birdsong now. It was always there, we just couldn't hear it
7

Coronavirus anxiety keeping you awake? Here's how to get more sleep
9