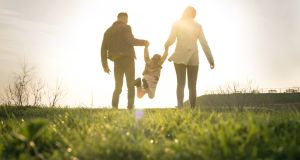 A family can be complete with one child or 10. You make your own family dynamic. Photograph: iStock

The only-child debate has been a long and drawn-out conversation with polarising opinions. The most prevalent, and less than encouraging, argument being that only children are spoiled, bossy and anti-social, attaching a strong stigma for parents of only children and the children themselves.

These negative arguments do very little in battling this stigma for single-child families, which are continually on the rise. In fact, throughout the years, research has debunked the myths surrounding the lonely, awkward and antisocial only child highlighting the importance of the quality of familial relationships over the numbers of siblings.

Economics, relationship breakdowns, delayed parenthood, birth circumstances and fertility play a large part in whether couples add to their families. Listening to friends and family say you need to have another child is upsetting for parents pondering such a life decision, adding guilt and blame to their already worrying minds. But many of us have been there with one child listening to the constant probing of family on the necessity to have another.

We routinely ask ourselves: will my child be lonely?

Is it fair for them to bear full responsibility for us in our old age?

Am I cheating my child out of family experiences and memories?

Yet, adults who have grown up as only children will wage war on these questions, easing the worrying mind of any parent with an only child. It’s actually okay. They didn’t turn out selfish, they weren’t overprotected, they weren’t unhappy or felt like they were missing out. Essentially, the question is not about being an only child, but creating a positive family balance irrespective of giving your child siblings or not.

As a mum of two, a close friend of mine routinely asks me what life is like with two kids as she balances up the pros and cons of going again. A conversation we have been having for several years, always resulting in the same answer lacking in any real motivation.

Her daughter is approaching six and as the years move on, the actuality of going again is further and further from becoming a reality. Mostly because they are a perfect family of three and that dynamic does not need to be rocked. And yet, my friend still wrestles with the decision because she worries about having “just” one child, wondering if it’s a mistake not to have a second and give their daughter a forever friend, forgetting that siblings are not always lifelong besties.

Mum of one Eimear Devaney faced this common conundrum after a traumatic birth led to her suffering with post-natal depression and anxiety. She says the initial decision to only have one child was made from fear, in the aftermath of their son’s difficult birth. “I worried I would suffer again, that my anxiety would be unmanageable during another pregnancy,” says Eimear.

“Then as time moved on and I progressed I became happier about our decision to remain as a family of three. We are a solid little unit and myself and my husband are very content. At this stage I cannot imagine ‘starting over’. Our son turned five in September and has started school. He is very happy and confident. He has close relationships with his cousins. I tend to worry more about when we are older and the effect of being an only child with elderly parents. When Joe is older, we will explain to him why he is an only child. He talks about being a big brother and that does affect me.”

Everyone has an opinion about only children, but few are willing to admit how wonderful and positive the family dynamic of a one-child family can become, says Mulhall. “Parents of only children are calm and resilient which are vital traits to display in a world where children are learning so much from observing parents’ attitude and behaviour. It is the quality not quantity of relationships that is important to any child.

"Children who are most happy and confident are supported by a retinue of human wonders; grandparents, childminders, caring neighbours, teachers, aunties and so on. Friends of only children become family; they go out of their way to be there for them through the good times and the bad; friends become siblings and these close bonds carry through over years. Only children have a greater capacity to form and maintain relationships which is a key component to being mentally healthy and having a positive sense of wellbeing.”

Artist Grace Daniels, known as Mama’s Drawing Room, delicately and abstractly draws the beautiful moments of motherhood. Her insight into parenthood and the parent-child connection, is garnered from her own experience as an only child raised in a one-parent family, and as a mother of two boys herself.

“My parents separated when I was five,” says Grace. “It was just me and my mum growing up. We’re incredibly close. She’s definitely my best friend. I have a large extended family, so I never felt I missed out on any relationships. It was always just us two at home, on days out or holidays, so attention and conversation were completely even but we did fall out regularly too just because of the sheer amount of time together. I did a lot of arts and crafts because they could be done alone or with my mum. I used to choose games based on the ability to play them by myself when friends weren’t around (Kerplunk was good!). My mum and I speak every day. She’s incredibly helpful and supportive. Sometimes I think I would have liked siblings but I’m quite thankful she doesn’t have to spread her time!”

Raising children comes with a tremendous level of guilt, doubt and constant questioning which we continuously wrestle with. Deciding to have a second or third child is always a big decision with a whole list of pros and cons no matter which number you’re on. If you ask an adult who is an only child what their lived experience has been like, I have a feeling the majority would respond positively. Only children are often afforded greater independence, leadership, confidence and the ability to enjoy their own company.

There are arguments for all decisions in life. If you are in the middle of the only-child debate, weighing up the pros and cons, remember our perceptions of what constitutes a family are changing. The gentleman’s family is fading as the perfect option. A family can be complete with one child or 10.

You make your own family dynamic.