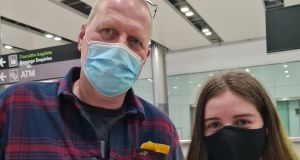 It was oh, so quiet at Dublin airport on Sunday morning, as the rain lashed, the wind blew, and the 5am flight from Boston landed early at 4.41 am.

At arrivals there were no crowds of over-excited families crushed against the barriers, waiting. There were no choirs of delighted schoolchildren singing carols, no spontaneous piano players, and fewer decorations than you’d find on the set of a Samuel Beckett play.

A cleaner pushed his trolley while quietly singing “many a tear has to fall, but it’s all in the game...” None of which mattered one whit to Julie Dupuy or her four children, Luke (13), Eliot (11), Anna (9), Collette (5) and her accompanying (upside down) rabbit.

There to meet them were her Mama and Papa, David and Alison Beasant from Parkgate in Co Antrim, suddenly lost in hugs, various small people and accompanying ‘rabbit’ and ‘dog’.

“We finally got here after a year,” said Julie. “We normally see each other every few months. This has been a hard year for everybody.” She has been in Chicago for 16 years where her husband is a financial advisor. “He’s American but was born in Switzerland. ”

They were home “for just a week. We’re here to see them [parents], we’re not really here to see Ireland, so we’re happy to sit in the house and light the fire and catch up.”

In Chicago, Covid-19 restrictions were “about the same as you would find in Ireland but I think, right now, we’re excited to get the vaccine. The kids are not in school, they’re still at home ”.

Yousuf Mellick was heading home to Ballinderreen, Co Galway. He has been studying international business at Northeastern College Boston since September. “It’s all good. We’re getting tested every three days in the College and they have the results in, I think, eight hours. So by the end of the day we have the results.” They have “the option to do remote work, going into the College every few days.”

Similarly with Sorcha McAllister from Westport, Co Mayo. She is studying leadership and administration at Boston College since September. She lives off campus in a “big dorm-style bubble. I kinda keep within my bubble. We’re tested once a week and even from the build up I was tested twice a week before I came here.”

She is going to quarantine in Ireland “and after five days you get tested and if you come back negative then you can leave quarantine. I’m not going back until the 23rd of January. My Dad is picking me up.”

Lily Richards and Patrick Combe also flew in from Boston, though neither is based there. “My parents are from Dublin. I’m also from Ireland but I grew up in Singapore. ”

“I’m from LA but I married his sister so I’m here for Christmas.” said Lily. With “no direct flights from LA to Ireland” it was “the easiest spot for Patrick to meet up so we spent a night in Boston. ” Patrick lives in Washington DC, where he is a software engineer.

“I was tested every week. DC has really good testing. California is a bit of a different story,” explained Patrick. Lily added however that “LA, California actually, does have a great testing system. It was started by Sean Penn, weirdly enough. It’s free testing, drive-through testing. We got three negative tests before we came.”

Patrick added that “we’re actually going to be in a house in the countryside for two weeks to quarantine. We’re going to be here three weeks.”

Bernard Callaghan has been in Boston 33 years. He and daughter Megan were heading to Clonmanny near Malin Head in Co Donegal. “I had a couple of aunts there [Boston] and went out to them in 1987,” he said. He works as a mason contractor. He was “tested before the flight. They say it’s not compulsory but it’s good to do it.Going to quarantine here for 14 days .”

Geraldine Porter, with dog Oisín, glided into arrivals on her motorised chair. They and husband Mark McGranaghan had come from Knoxville, Tennessee. “We’re home for good,” she said. They have been in the US since 2004.

About Oisín she said “12 years ago I gave him an Irish name because he was going over to the States.” They had been back in Ireland since February last but returned to the US two weeks ago “to empty our house and close it,” said Mark.

An engineer, he was “very excited” about working from Ireland for his US parent company, from next month. They are based in Greystones.

In Tennessee “we don’t talk about politics.” Covid-wise “it’s terrible, desperate, really desperate. People are going round without masks. It’s unbelievable. We’re running out of the country,” she said. “We’re back for good.” We’ll have to quarantine now. We can do tests ourselves,” she said.

An estimated 137,000 people are due to travel through Dublin Airport this Christmas compared to almost 1.2 million people who passed through the airport during the comparable period last year. About 127,000 of those passengers are travelling to and from Ireland during the Christmas period, while about 10,000 people are connecting passengers who pass through Dublin Airport.

From Monday next until Monday, January 4th there is expected to be an average of 8,615 departing and arriving passengers per day.