Why you should give a rashers about what you eat

Given the additives used, choosing bacon is a trade off – you can have your bacon and eat it too, but not too much if you value your health 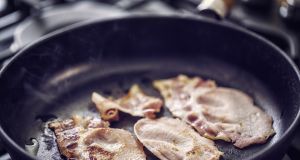 Rashers have got such a bad rap lately, you might wonder if it is even worth reading the packet when you buy them. But it is. Scrutinise the list of ingredients and you will see why they are so maligned. A simple pack of Tesco Unsmoked Irish Rashers lists its ingredients as: pork (92 per cent), water, salt, preservatives (sodium nitrite, sodium nitrate), antioxidant (sodium ascorbate).

Taking the last one first, sodium ascorbate is a form of vitamin C, which is used essentially to help to maintain the colour and smell of the meat.

Sodium nitrate and sodium nitrite are used as preservatives and to add colour and flavour. (You will notice them as a white gooey scum when frying.) They have been classified as probably carcinogenic to humans by the International Agency for the Research of Cancer. In 2015, the World Health Organisation repeated the advice that we should moderate our consumption of preserved meat, including bacon and ham, to reduce the risk of developing cancer.

Nitrates and nitrites aren’t all bad, however. “Nitrite prevents the growth of a harmful bacterium called Clostridium botulinum and it may also have preservation effects on other harmful and spoilage bacteria,” according to the Food Safety Authority of Ireland. “In addition, nitrite develops cured meat flavour and colour and retards the development of rancidity and off-odours and off-flavours during storage of cured meats. Nitrite is responsible for the characteristic pink colour of cured meats.”

Nitrates and nitrites are authorised as food additives within the European Union.

Some believe nitrites have no place in food. It is possible to find nitrite-free bacon and Finnebrogue, a company in Northern Ireland, is planning to bring a new product to supermarket shelves.

Nitrites aren’t the only problem, however.

The second ingredient is water, as that is almost always the case with bacon, given the way it is processed. It also has sugar in the form of glucose, which seems untraditional and unnecessary. Yeast extract, which is a key ingredient in Marmite too, helps to give a meatier taste, though it does have a high concentration of glutamate, from which monosodium glutamate, better known as MSG, is derived.

The stabilisters – sodium triphosphate, sodium polyphosphate and sodium diphosphate – are added to meat products to help them to absorb and retain added water.

Last December, MEPs debated whether to tighten controls on these additives before narrowly rejecting a ban on them. Phosphates for use as food additives will be re-evaluated by the European Food Safety Authority by December, 2018. So they may be on their way out. Concerns have been raised in recent years about potential ill-effects on cardiovascular health following two studies.

You have been warned. This is one to watch.

The more expensive Galtee Thick Cut Traditional Cure Rashers offer up some surprises. For starters, there is less pork and more forms of sugar even though this is not “maple-drenched” bacon.

In Denny’s Maple Cured 6 Tasty Rashers sugar appears in three forms: demerera sugar, natural maple flavouring and dextrose. Though, in fairness, they are 92 per cent pork. Rudds Dry Cure Rashers do even better, with 98 per cent pork.

Given the additives used, choosing bacon is a trade off.

You can have your bacon and eat it too, but not too much if you value your health.