Is ‘cancer-free bacon’ a cause for celebration or just more 'nutribollocks?'

The WHO report that scared people off rashers and a bacon that's “safer than any other bacon on the market”. 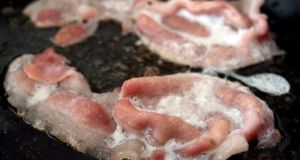 The 2015 WHO report on bacon – which if you just read the headlines would make you never touch a rasher of bacon again for fear of imminent death – has been wildly and irresponsibly reported. Photograph: Anthony Devlin/PA Wire

The bad news about the much-loved rasher of bacon is that ever since a damning World Health Organisation report from three years ago, people have been scared off eating it. The WHO report ranked bacon as a Group I carcinogenic (the most cancer-causing category) right up there alongside tobacco, plutonium and asbestos.

If that wasn’t bad enough, WHO also stated that eating two rashers of bacon a day increases your relative risk of developing bowel cancer by 18 per cent and, furthermore, that 34,000 deaths per year worldwide were attributable to people eating bacon.

But the good news about bacon is that a Northern Irish food company called Finnebrogue in a “remarkable feat of food technology” (their own words) have now managed to produce a nitrate-free bacon (it’s the nitrate used in bacon’s curing process that is believed to be responsible for causing cancer) which is, the company adds, “safer than any other bacon on the market”.

The media bunting was hung out earlier this month to welcome this “bacon without cancer-causing ingredients” (London Independent); “Cancer-free bacon” (Daily Express) and “Bacon without the guilt” (Guardian).

There was much rejoicing that the great Irish (and British) fried breakfast was safe once more and that bacon could be wolfed down again without any health concerns.

But both parts of this story – the good and the bad – are a confused mix of fake news, selective reporting, and what is now technically known as “Nutribollocks”.

This story of “cancer-free bacon” can be seen as a parable about all that is wrong to how we receive and act on media information about our food and our health.

Typically, there are a lot of these “miracle” style stories in January every year – a time when people are actively seeking out better nutritional choices. Vastly overpriced exotic food compounds marketed as “Nutritional Powerhouses” hit the supermarket shelves; foods which claim to “reduce the risk of” cancer/heart disease, etc, wink at us in the aisles.

The 2015 WHO report on bacon – which if you just read the headlines would make you never touch a rasher of bacon again for fear of imminent death – has been wildly and irresponsibly reported.

Yes, bacon (like most processed meats) is a Group 1 carcinogenic alongside tobacco and asbestos, but as WHO is at some pains to point out that does not equate to bacon being as damaging as tobacco – “this does NOT mean that bacon and tobacco are equally dangerous” states the report (the italics are theirs).

The Union for International Cancer Control shed some light on these figures: “The 18 per cent increase means the risk of developing bowel cancer is 1.18 times higher for those who eat 50 grams (two slices) of processed meat per day compared to those who eat none. The figure 1.18 is known as “relative risk”.

“Put this way, the increase is quite small. By contrast, people who smoke cigarettes have about 20 times the risk of developing lung cancer as people who do not smoke. Expressed as a percentage, the increase in risk due to smoking is 1,900 per cent. The problem with presenting relative risk is that many people will incorrectly conclude that if they eat processed meat, they have an 18 per cent (almost one in five) chance of getting bowel cancer – thus, they were misled”.

But that’s the boring small print when the top-line here is of a bacon which supposedly won’t give you cancer.

As for the health risks being eliminated, Prof David Spiegelhalter, the professor for the Public Understanding of Risk at Cambridge says of nitrate-free bacon: “The World Health Organisation said eating bacon regularly raises bowel cancer risk by 18 per cent. But that isn’t really that much in the real world. What removing nitrites might well do is make a small risk even smaller. It doesn’t mean it’s completely safe – but then nothing really is.”

Nitrate-free bacon is a welcome, if expensive, development.

But, however you slice and dice this “revolutionary new bacon”, it is still bacon, as in a processed meat. Bacon is high in fat and salt and best consumed occasionally, not daily.

Media reporting which places the words “cancer” and “free from” beside “bacon” makes for a great headline but can be misleading and irresponsible.

As Paolo Boffetta, a leading cancer epidemiologist, who has served on various WHO panels, told Wired magazine, there will always be a big interest in health reports which claim “X food causes cancer” and “Y food reduces the risk of cancer”.

“Saying ‘X causes cancer’ does not mean that X will definitely give you cancer, it just means that X increases your risk of cancer by some amount, and it can vary wildly from a tiny tiny percentage to 25 fold.”

The wider point here though is focusing one particular foodstuff – and somehow granting it miraculous properties – makes a nonsense of nutritional best practice. It is everything we eat over the course of a day, week, month, year that will help determine our health and risk of serious illness.

Bacon – whether nitrate-free or not – is a glorious food, there to be enjoyably scoffed, but in moderation.

Even if you are to believe all the claims being breathlessly made about nitrate-free bacon, this is still not a nutritional get-out-of jail-free card.

But the New Year/New Me jostling continues as people look for easy fixes to circumvent the need to take a cold, hard look at what they eat in totality.

“Turmeric is the new Avocado”, “FODMAP is the new Gluten-free”, “Monk fruit is the new Goji Berry” are all listed in various publications as the big healthy-eating nutritional trends for 2018.

Food is becoming as fickle and preposterous as the yearly new fashion shows.

Nitrate-free bacon may well be the new black, but becoming neurotic about nutrition is not a good look on anyone.