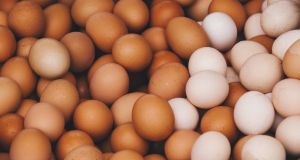 Changing one syllable in the order in Korean would mean the difference between 1,500 and 15,000 eggs. Photograph: iStock

Chefs with the Norwegian Winter Olympic team found themselves with 13,500 unwanted eggs after what they describe as an error while ordering for their hungry athletes from their South Korean base.

The chefs, who are catering for their country’s 109 competitors at the Pyeongchang games, ordered 15,000 eggs to be delivered to their kitchen instead of 1,500 needed.

Speaking to the Norwegian newspaper, Aftenposten, chef Stale Johansen, said his team “received half a truckload of eggs” and that there was “no end to the delivery” adding it was “absolutely unbelievable.”

Fortunately for the team, who, according to Johansen have enjoyed eating fresh salmon and tacos in the past, once the chefs realised their mistake they were able to return the 13,500 surplus to the grocer.

And while a crisis was averted, questions around the cause of the mistake remain. There have been some suggestions that Google translate was used to make the online order however this is unlikely to fully explain the error.

It is common for restaurants to buy eggs by the crate in multiples of 30 in South Korea, but changing one syllable would mean the difference between 1,500 and 15,000.

The chefs have not released any further details – yet.

When I move to my new home, I'll miss Ma throwing her beady eye over everything
7