Why people just can’t stop eating Doritos and other snacks 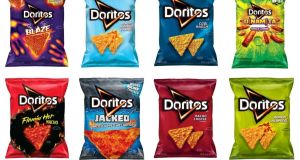 Doritos: It’s not your fault if keep wanting to go back for more

It is unusual to find a book dedicated to one type of snack, unless you count Mr Tayto’s, which was really a biography. There is, however, one dedicated to a popular brand of corn chips. It is The Dorito Effect: The Surprising New Truth about Food and Flavor, by Canadian journalist Mark Schatzker.

This isn’t just a cosy story of how a Madison Avenue ad man taught the world to fall in love with crunchy tortilla chips. Rather it tries to explain why we love these snacks so much even though they have little nutritional value. The answer is that “in nature, flavour never appears without nutrition”, Schatzker writes. So we are programmed to want it because more flavour is associated with more nutrition.

So it’s not your fault if you crave chemically enhanced junk food, the theory goes.

When Arch West left New York to take up the job as vice-president of marketing at Frito-Lay, corn chips were seen as boring snacks mostly eaten in Mexico. West changed that by giving them a new name, Doritos, meaning “little pieces of gold”. That wasn’t enough to excite consumers, though, as they still tasted of nothing more than toasted corn. The turning point came after he got a team of scientists to create a flavouring that would make the chips taste like tacos. There are now more than 100 Doritos flavours, though just a few of them are on sale in Ireland.

The closest to the original unflavoured snacks from Doritos are the Lightly Salted Tortilla Chips. These are made from just corn, vegetable oils (corn, sunflower and rapeseed, in varying proportions) and salt. The pack identifies them as being from Walkers Snack Foods in the UK, which is now owned by PepsiCo, which owns the Doritos brand.

Essentially the Cool Originals have the same ingredients as the Lightly Salted, but with another special ingredient described as “Cool Original Flavour”. This includes a raft of flavourings, flavour enchancers, acidity regulators, cheese powders, spice and colour. There is also sugar and glucose syrup, which is another form of sugar. Those flavour enhancers include monosodium glutamate, disodium 5’-ribonucleotides, which create that savoury taste best described as yummy. Citric acid helps to make the mouth water. Doritos are fried in oil, and there is oil in the ingredients. Fat, salt and sugar in one mouthful is highly seductive to our tastebuds.

The most intriguing aspect is that the perfect balance of flavourings means we always want more, according to Michael Moss, author of Salt, Sugar, Fat: How the Food Giants Hooked Us, writing in the New York Times. Nothing dominates. “No flavour is strong enough to cause satiety.”

So you are never satisfied and it’s not your fault if keep wanting to go back for more.

What you are going back for isn’t always obvious from the name or the information on the front of the packet. Flame Grilled Steak Doritos are described on the packet as “suitable for vegetarians”. Of course they are. There’s nothing resembling meat being used to create the taste, though there are plenty of milk derivatives.

Portion size is difficult to work out with this brand too. In a six-pack sack all the bags are 30g. A sharing bag describes a portion as 30g. Buy a single bag, however, and it is 40g. Confusing.

What’s even more bizarre about these snacks is that sharing bags of Doritos in the UK weigh in at 180g, which is down from 200g just a few years ago. In Ireland, however, the standard sharing bag is 150g. It costs more, too, at €2.69 compared with £1.99. So we are paying more for less.