There are five new additions, in Dublin, Dingle, Athlone and Killinchy, in the 2020 Bib Gourmand listings 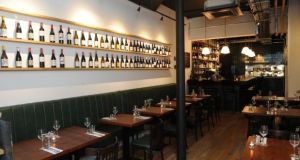 Uno Mas, Dublin 2, has been awarded a Michelin Bib Gourmand, but sister restaurant Etto, also in Dublin 2, does not appear on the 2020 line-up of Bibs

Five restaurants in Ireland, two in Dublin, one in Dingle, one in Athlone and one in Killinchy, have been awarded Bib Gourmand status in the Michelin Guide to Britain and Ireland 2020.

The newcomers are Circa in Terenure, Dublin 6W; Uno Mas in Dublin 2; Land To Sea in Dingle, Co Kerry; Thyme in Athlone, Co Westmeath; and Balloo House in Killinchy, Co Down.

However six high profile Dublin restaurants, as well as two in Northern Ireland and one in Co Waterford, have not been given Bib Gourmand accreditation in the 2020 Guide.

The non-inclusion of Dublin restaurants Bastible, Delahunt, Etto, Pig's Ear, Craft and Forest & Marcy, has raised speculation that Michelin may be about to substantially increase the number of one-star accreditations in the Irish capital, when its 2020 Guide is launched in London on Monday afternoon.

Price could also be an issue as there is a  €40 cap on the cost of a three-course meal in the Bib Gourmand category, which is for restaurants which the company describes as offering  "good quality, good value cooking".

In addition to the Dublin omissions, Bibs have not been retained by Bar + Grill at James Street South in Belfast, Fontana in Holywood, Co Down and The Copper Hen in Fenor, Co Waterford.

Eugene Long, owner of The Copper Hen, moved his restaurant from Fenor to Tramore last December, but did not make Michelin aware of the change of address. In September of last year, Bar + Grill at James Street South, and James Street South Restaurant merged, to become one premises, called James St.

Uno Mas, opened in December 2018 by Simon Barrett and Liz Matthews, also owners of Etto, and their business partner and head chef at Uno Mas, Paul McNamara, found favour with the Michelin inspectors as a “stripped-back bistro which serves flavour-packed Spanish dishes in Dublin city centre.”

Circa in Terenure, which opened its doors in April, is described by the Guide as “a laid-back neighbourhood restaurant run by four friends.” The four in question are chef Gareth Naughton, formerly head chef at Suesey Street, Ross Duffy, Robert Murphy and Emmet Murphy.

In Dingle, Co Kerry, a new Bib Gourmand goes to Land To Sea. “Local meats and great fish and shellfish unsurprisingly feature,” the Guide says of this restaurant owned and run by chef Julian Wyatt and his wife Katia.

In Athlone, Co Westmeath, chef John Coffey’s Thyme restaurant gets a Bib for the first time, with the inspectors noting that is “popular with the locals” and where “the staff are bright and the cooking full of flavour.” Coffey opened the restaurant in 2007 to showcase what he believes to be the outstanding food produced in the Midlands.

Balloo House in Killinchy, Co Down, a pub and restaurant previously listed in the Michelin Eating Out in Pubs Guide, earns a Bib Gourmand for 2020, being commended for offering “so much more than just comfort food.”