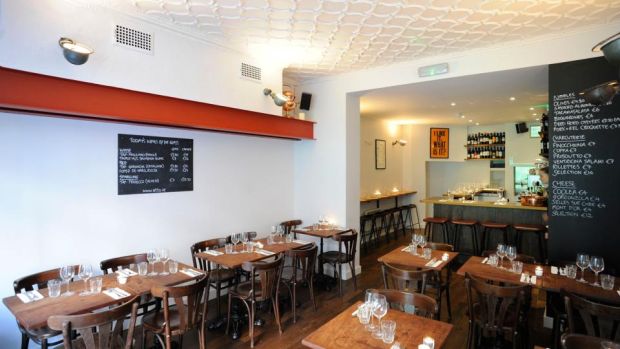 Stop reading this review. Now pick up a phone and ring the number at the bottom of the page to book a table. Done? Okay now you can read on. Because I think you’re going to love this new restaurant. But you’ll have to book ahead, or have given birth to a member of staff, to get fed there in the coming months. And here’s why.

It’s a wet Tuesday night, less than a week since Etto on Merrion Row opened its doors and half the tables are taken up with food people. What’s the collective noun for us as a bunch of writers, restaurant managers and food Tweeters, my friend and I wonder? A congealment, I reckon.

Etto is a teeny, blink- and-you’ll-miss-it, white-painted wine bar with blackboards outside on this strip just down from O’Donoghue’s pub. It used to be a branch of the vegetarian restaurant, Govindas.

The finer details of the menu blur in the haze of hunger and lust brought on by the words on the simple A4 sheet of white paper. There isn’t a dish on this Italian-inspired menu with which I wouldn’t want to get up close and personal. But hold those horses. I’ve been charmed by menus before. They whisper delicious sweet nothings but something slips between word and plate. Then all that hope dies in a sorry case of coitus disappointus.

The Irish restaurant scene is reaching a tipping point. It’s got the hang of brilliant ingredients and good ideas but the system is simply not training enough chefs well enough to execute them. The chef here is Barry Fitzgerald, former head chef of the Michelin-starred Harwood Arms in Fulham. Since coming home from London he’s done a pop-up restaurant and a stint at John Farrell’s Butcher Grill in Ranelagh. And now he’s here with friends who’ve opened this wine bar.

The team is young and bright-eyed with enthusiasm. The place is a white-painted stark room with exposed beams and light fittings that look like they were salvaged from a sunken ocean liner. Tealights add a glow and half of the space is given over to stool seating around a bar and along a side wall.

My guest Jeanne hones in on the meatballs, one of the small plate options. They remind her of her first hot date with a Sicilian who confessed his deep dark secret to her: his vegetarianism. She sought comfort from the shock in a plate of Sicilian meatballs. And yes reader, despite this, she married him.

There are nibbles, charcuterie boards, small and large plates and sides. The most expensive plate is €19. We get a carafe of the Soave and a couple of bottles of sparkling water and then the feasting or simple food inhalation begins. At one point I realise my elbows are pointing out like an excitable bantam hen as I rummage round on the plate to combine one taste bomb with another for maximum mouth explosion.

The first swoon is a small croquette of pork belly and smoked eel which is a panko-breaded ball of intense piggyness made even more so with tiny, smokey chunks of chewy eel. I regret halving this to share. Next time I’m getting a whole one of these babies for myself.

The meatballs are pork and veal, two pool ball-sized bruisers topped with syrupy cooked lemon slices on a bed of what looks like mash but turns out to be polenta. They’re studded with juicy raisins inside, little pinpoints of sweetness in the meaty globes. There’s a small bowl of kale in cream with pancetta and petal-soft slices of sweet chestnut to balance the cabbagey kick.

Crispy potatoes are skin-on rounds of spuds, lots of those shards found at the bottom of a bag of chips finished with a baked on grating of pecorino. Four soft warm ricotta gnudi (like gnocchi only with ricotta instead of potato) sit in a puddle of sage butter and are speckled with tiny pieces of the herb. A sage leaf fried in butter sits on the top. These are dopamine in a dumpling.

Waxy rounds of spicy Ventricina salami come with a tiny pot of gorgeous pickled vegetables and burnt toasts. I forgive them the burnt toasts. Desserts are delicately restrained with no heavy hand on the sugar. A honey coloured sticky-date ice-cream is grown-up stuff with lemon curd to give it a zing. An espresso cup of bitter chocolate mousse is the right amount of bitter and comes with mead-soaked raisins and a crumblingly fresh hazelnut biscuit. We’re given a sample of the prunes with vanilla mascarpone because customers have been likening its addictive properties to “crack”, according to our waiter. It comes with a vanilla mascarpone that acts like a big dairy buffer to stop the runaway sugar train.

I love Etto. It’s the kind of casual yet also grown-up eating place Dublin has needed for a while. It’s not ponderous or expensive and it doesn’t come with a pounding music soundtrack designed to make you drink more. They just put big flavours on small plates. And that’s a feat that isn’t as easy as it sounds.

Dinner for two with wine, sparkling water and a mint tea came to €87.80