Where’s the potato? A day on Dublin’s Fab Food Trail 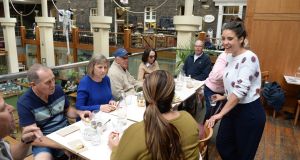 “We thought Irish food was just potatoes, and bangers and mash, not really flavourful, but it has been very flavourful.” Stacey Handwerker is visiting Ireland from Tampa, Florida with her husband Kurt, daughter Bianca (8) and mother-in-law Rosalee French.

“We were not expecting good food and we were stunned how good the food was.” Carole Freilich, from West Palm Beach, Florida, is on her third visit to Ireland, this time a one-day cruise stopover, with her husband Roger and their friends Roger and Kathy Cope.

It is a familiar narrative, and one that no longer surprises the guides – food writers, chefs, photographers and food entrepreneurs – who work with Fab Food Trails in Dublin and Cork. The company offers three-hour walking tours, during which the groups stop at seven or eight food and drink businesses to taste top-class Irish produce and chat about the people who make it.

For a fee of €60, the trail is an intoxicating mix of tasty food and drink and fascinating stories. Most of all, it gives participants – visitors and locals – a sense of having their finger on the pulse of the city’s fast-changing food and drink scene, while absorbing historical and contextual detail.

“The idea came at the Adelaide Books Festival around 2003 when I was talking about the quality of Irish food and produce, in a casual conversation, and someone suggested doing something like this,” says Eveleen Coyle, who set up Fab Food Trails a decade ago in Dublin and expanded to Cork three years later.

Coyle, who previously worked in book publishing, personally selects the places the trails visit, and currently has arrangements in place with 19 Dublin businesses. She pays them, per head, for hosting the groups, and for the food or drink consumed.

“We look for places that are smaller, independently – and Irish – owned, that are doing something really well using Irish produce. We want to reflect both the traditional and contemporary.”

Each trail visits seven or eight premises. “The itineraries are drawn up based on the size of group, and on rotation of the venues,” says hospitality graduate and Fab Food Trail guide Erica Drum. At each venue, a staff member talks briefly about what’s on offer there.

Drum mixes her tour guiding with a career as a private chef, recipe tester and cookery tutor, and hosts groups in her home for cookery workshops. She has also worked as a chef, ran her own food truck business, and spent a decade managing restaurants in Dublin.

On the morning I join her at the designated meeting place, the Mansion House on Dawson Street, she is expecting 10 guests – the Handwerker family group from Tampa, the cruise foursome from West Palm Beach who have disembarked from Crystal Serenity for the morning, and David and Julie Glock, visiting from Essex.

After a brief introduction to the Irish food scene, historical and contemporary, we’re off to our first destination, Sheridan’s Cheesemongers, where Michael Conefrey hands round generous samples and explains the origins of the Irish farmhouse cheese movement, expertly fielding questions about raw milk.

Next, we stroll to the Pepper Pot cafe, in Powerscourt Townhouse, where the group marvel over the scones served with raspberry jam and cream. “I thought scones were meant to be hard – in the States they’re crumbly,” says Stacey Handwerker, who owns a number of healthcare companies; her husband Kurt is an engineer working in television with ESPN and NBC. The family will spend almost three weeks in Ireland, staying at Ashford Castle, visiting Donegal and Adare, and attending the Galway races.

At Lolly and Cooks in the George’s Street Arcade, we snack on the signature savage rolls, a pimped-up version of the sausage roll, before heading to Fallon & Byrne for a look around the shop shelves and another taster, this time Boilie goat’s cheese and Fingal Ferguson chorizo.

Walking to our next destination, Niall Sabongi’s Klaw seafood shack in Temple Bar, David and Julie Glock tell me their daughter is a pastry chef who worked with chocolatier Paul A Young in London, before setting up a wedding cake business. The Handwerkers promise to share their little black book of New Orleans restaurants. Roger Freilich reveals that although he is a retired doctor, he “always wanted to go into sports journalism”, and his school friend Roger Cope reminisces about his first visit to Ireland, for a Boston College versus the Army football game in 1988.

Kathy Cope sums up the experience of this food tour succinctly: “You see a side of Dublin that we wouldn’t normally see.” She is enjoying being pointed in the direction of the “right” spots. “If we were staying a couple of days I would definitely come back to these places,” she says.

Back on the footpaths again, we head for the Swan Bar on Aungier Street, one of Dublin’s remaining 12 Victorian pubs, where owner Ronan Lynch pours tasters of Writers’ Tears whiskey and provides a fascinating insight into the bar’s history.

Our final stop might sound like it hasn’t got much to do with Irish food, but almost everything Michael Ryan uses at his Dublin Pizza Company takeaway is Irish in origin, other than the know-how, which he went to Naples to acquire. Even the pizza-aficionado Americans are impressed with this one, and it brings our seven-stop eating, drinking and learning odyssey to a satisfyingly gooey and chewy conclusion.