Review: Enniscoe House offers food from a few metres away

Dinner here is a reminder of things almost lost, now surviving in quiet corners of Ireland 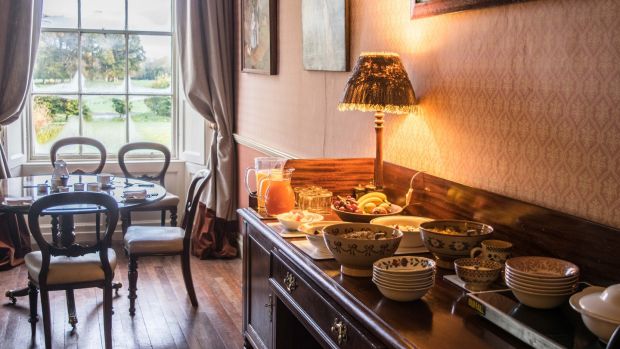 Driving past dry fields and copses of trees on the way to Enniscoe House, there’s a feeling of time falling away like the bars of signal on our phones. We crunch over the gravel to the big pink house overlooking Lough Conn and step into another era. Across the threshold there’s the smell of old house and good food. Edith Piaf’s La Vie en Rose is playing over in the dining room. It’s on a loop so we’ll hear it at least once more this evening, but it seems right.

There’s a simple two-course menu here tonight and we make our choices over pre-dinner drinks. The sash windows have their original glass. It looks like boiled sugar in parts, with the occasional trapped bubble of air that’s more than 200 years old. There’s an assortment of comfortable furniture and a glimpse of a storage heater which must take the icier edge off the polar corners of this large room not reached by the heat from the large fireplace.

I’m hoping to taste this summer of summers in the food tonight. Enniscoe House outside Crossmolina in the hinterland of lonesome Nephin isn’t just a big house for us to go and play Flurry Knox. It’s a food enterprise with a large organic kitchen garden out the back. The North Mayo Heritage Centre is in the grounds of the house. Many of the exhibits in its small museum relate to the growing and preparing of food, along with the back-straining work that went into the running of a big house.

Stretching out past these old windows a walled garden devotes two of its three acres to growing organic vegetables and fruit. The garden was laid out in the 1840s and restored in 1995. They supply restaurants and sell produce from the garden during the week as well as providing ingredients for their own kitchen.

In the dining room there’s another mixum gatherum of furniture. Our round mahogany table is on castors. It has been known to wheel itself away from diners who attack their dinners too enthusiastically, the waitress tells us.

The stars of our dinner tonight will be the food that comes from the garden, cooked with the confidence to know that when your starting point is this good there is no need to add too much. There’s a quiche made with buttery pastry and filled with chunks of chorizo and black olives. It’s accompanied by what the menu calls a “green salad”. This is a beautiful underplay of what’s on the plate.

There are leaves and rounds of cucumber with a waxy yellow skin, so different from the watery limp version that it’s like a different vegetable. Liam has a red pepper and anchovy tart, the simplest gathering of tasty things on filo pastry salty and sweet with more of those garden greens on the side. A bowl of carrot and cumin soup for both of us comes with a frothy puddle of cream and chives in the middle. Soup can feel like a nursing home filler in the wrong hands, but not here. There’s a generous main course plate of chicken with a sticky orange and mustard sauce. The better dinner is my salmon served with a lemony cream over it and a side bowl of the best potatoes I’ve had outside of my Dad’s home-grown new season Queens. There are broadbeans too, still in their dull green casings but young and fresh enough to get away with it. The only duff note is some watery cauliflower which would have been much better oven roasted.

The Dutch family at the next table are charmed to the hilt by the dessert. Again its menu description – summer fruits with baby meringue – does not set the pulse racing. But instead of frozen and then sugared fruit here it’s a tumble of gooseberries, red black and white currants all bursting with sweet tang and a beige meringue chewy in the middle. There’s an excellent chocolate tart also but those summer fruits could be given their own glass case in a museum of food memories.

Dinner here is a reminder of things almost lost, now surviving in quiet corners of Ireland, a time of cooks and gardeners and meals that started with the question “what’s good or plentiful today?” It’s where delicious things begin.

Verdict: 8/10 – A living museum of good food memories
Facilities: Quirky like this house
Music: Ye olde greatest hits on a loop
Food Provenance: Much of the fruit and vegetables from a few metres away
Wheelchair access: No
Vegetarian options: Limited

I came back to Enniscoe House the next day to try the Secret Garden Cafe in the grounds. Sitting on the terrace beside a fig tree laden with fruit we got a lovely lunch salad of pickled beets, carrot sticks and hardboiled egg quartered into the mix along with avocado and toasted seeds. The middle son had granola made with peanut butter baked into the nutty oats and dried fruit mix and all tumbled with fruits from the garden and excellent yoghurt. The standout memory will be a slice of apple tart, fork tine marks in the crust of home made pastry and tasting as good as that staple gets. Lunch for two with coffee came to €19.45

‘Your baby’s heart has stopped’: Hell and healing after the stillbirth of my son

Georgian-style grandeur with modern comforts in Blessington for €4.85m

‘It just took an angry menopausal woman to get something done’