Irish chefs bring A Taste of Dublin to Hong Kong

Mark Moriarty, Mickael Viljanen and Graham Neville to cook seven-course tasting menus for 120 guests in the Chinese city this week 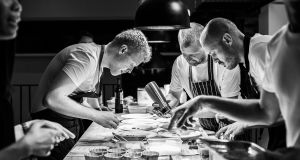 Mark Moriarty, Graham Neville and Mickael Viljanen will bring A Taste of Dublin to Hong Kong for four nights this week

Mark Moriarty, the Irish winner of the San Pellegrino global young chef of the year contest in 2015, flies to Hong Kong on Monday to run a pop-up restaurant for four nights at the Test Kitchen, a culinary innovation centre that invites chefs from all over the world to showcase their skills throughout the year.

It is the Dubliner’s second time cooking there, having visited Hong Kong as part of the world tour he undertook as a San Pellegrino ambassador following his competition victory.

“I got an email from the Test Kitchen founder, Vincent Mui a few months ago inviting us to come back,” says Moriarty, who will be accompanied in the kitchen on this occasion, as in 2016, by fellow chefs Mickael Viljanen and Graham Neville.

“It’s about mentors, and Mickael is my head chef at The Greenhouse, and Graham was head chef at Thornton’s, where I spent a couple of weeks in the kitchen when I was 15, and he looked after me.”

Moriarty returned to Dublin earlier this year, having spent some time working in Melbourne, Australia. He now cooks three days a week at The Greenhouse, a Michelin-starred restaurant in Dublin 2, as well as pursuing other projects.

He is currently working on a six-part TV series, which is in development with an Irish channel, and in September he will travel to Japan to cook in Osaka and Tokyo alongside Yasuhiro Fujio, the reigning San Pellegrino young chef winner, and Mitch Lienhard from the US, who took the title in 2016.

The Dublin trio are calling their Hong Kong four-night residency “A Taste of Dublin”, and their seven-course tasting menu (HK$1,180/€128) will be served Wednesday to Saturday, to 30 diners each night.

It is a collaborative effort, and all three have had input into the menu. “A couple of the dishes have elements we’ve done before, but some of the dishes are brand new. It’s putting three heads together and moulding all our styles into one menu, which is a very interesting creative thought process. It always is, but it’s easier when you all get on,” Moriarty says.

The seven-course menu will begin with a tartlet of whipped chicken liver and Hokkaido uni. “It’s very light and the uni is the Rolls Royce of sea urchin from Japan.”

This will be followed by Saba mackerel with Irish oyster, lightly poached, a preparation of cucumber, and horseradish juice frozen in liquid nitrogen. “That’s going to be a snow of horseradish. As it lands on the table it should have a little bit of mist coming off it, for a bit of theatre.”

The fish is being sourced in Japan. “We were going to fly in Irish mackerel, but it just wouldn’t last the journey. We’ve flown out turbot before because it’s actually better when it ages.”

A dish that has its origins in The Greenhouse is next on the menu – Cornue des Andes tomato with anise, vanilla and fennel, oscietra caviar. The tomatoes are from the South of France, Moriarty explains.

“We semi-dry them overnight in a very low oven for about 12 hours, so they go meaty and their sweetness really intensifies. The iodine nature and saltiness of the caviar enhances the sweetness of the tomatoes. It is a really cool dish, we’ve been serving it with lobster in The Greenhouse and it has gone down really well.”

Moriarty’s signature celeriac dish, the creation that won him the global young chef title, also makes it onto the menu. The celeriac is baked in fermented barley paste and served with hazelnuts and a beurre blanc of hazelnut oil.

Veal sweetbreads, confit shitake, 36 month aged Parmesan and sweet garlic sabayon is a completely new dish that the trio have developed for the pop-up. “We’re getting veal sweetbreads flown in from France and we’re going to use fresh and dried shiitake mushrooms. I’m going to confit them and make a really rich Bolognese of the mushrooms, and through that there’s going to be some confit veal tongue that has been smoked.” The roasted sweetbreads will have crisp potato discs on top and a Parmesan wafer for texture.

The first of two desserts is a chocolate and coffee delice with praline and yuzu, and sea salt ice-cream. “Murphy's in Dingle do a sea salt milk ice cream, so I’m doing a take on that. We’re using Irish sea salt and it brings out the creaminess in the milk. It’s almost like a take on an Irish coffee in a plated form,” Moriarty says.

Vine peaches, again from the south of France, with an olive oil drizzle will bring the tasting menu to a close. Manni olive oil from Tuscany, which Moriarty describes as “the best I’ve ever come across in my life”, proved to be hard to track down in Hong Kong, “but we’ve managed to get 200mls of it”.