Women and the ‘blokey’ world of beer 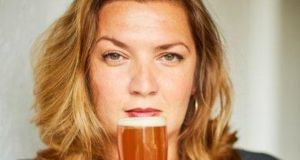 Melissa Cole: “All the research shows that everybody prefers gender-neutral marketing – people don’t want to be marketed to as men or women.”

Are you sure you want a pint of that?

Author and beer sommelier Melissa Cole has been asked this question more than a few times over the years while ordering at the bar. Like maybe she’d made a mistake and that she’d really prefer a half pint. Or the barman might say something about how bitter the beer is and recommend a fruity one to her instead.

“It’s a blokey space,” says Cole, referring to the world of beer. She’s the key speaker at next weekend’s Fem-Ale event in Cork hosted by Franciscan Well to celebrate women in the beer industry. “I know from experience that many women are uncomfortable about working [in] or drinking beer... There’s lots of bro culture.”

Brewers need to think about this, she says. “It’s about stopping and checking to see how you’re being as a group.”

Ah, yes, that’s one of the big hints I always give new judges, if a beer is clearly flawed and the whole table can see it then you don’t need to spend time telling the whole table what the problem is, they already know.
Also, don’t die on first round beer hills, it’s pointless.

The fact that women who do drink beer are often treated as exceptional or “amazing” just adds to the problem of genderising beer, she says.

Marketing hasn’t always helped, either, with plenty of sexist branding and beer names with macho gags appearing over the years. “All the research shows that everybody prefers gender-neutral marketing – people don’t want to be marketed to as men or women,” says Cole, adding that craft breweries are generally pretty good at this, with more of a focus on appealing to good taste and appreciation.

Things are changing for the better in the beer industry, however, Cole believes, with the number of female brewers and drinkers growing. Cole sees the issue as part of a wider diversity theme and she’s been part of the Everyone Welcome Initiative in the UK which is about making venues welcome to all, regardless of age, race, gender, sexual orientation, religion or disability.

“The whole point about getting more diversity is making it visible. There’s that old saying, ‘If you can’t see you can’t be’.”

Live beside the Edge in docklands penthouse for €1.7m
6

It’s time for summery food. Here are four easy dressings that work for every salad
9