What is in your oxtail soup – apart from water and a tail? 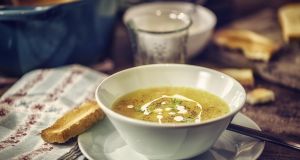 What is your favourite soup? If Knorr is correct, then it is quite likely to be oxtail, or maybe mushroom, or even chicken noodle soup, since all the brand’s packets contain the words “Ireland’s favourite soup”.

Hmm, surely if oxtail is number one in our hearts, then chicken noodle can’t also hold that place?

So is Knorr the most popular soup brand? Perhaps. It certainly was until it was overtaken by Cully & Sully, the Cork soup maker now owned by US food giant Hain Celestial. Last year, however, retail trade magazine Shelflife reported that in 2016 Cully & Sully had taken over the top spot from Knorr as “Ireland’s number one soup across chilled and ambient”.

Check out the small print at the bottom of the back of the Knorr packet and you will see that Knorr’s boast comes about thanks to its sales figures from 2015. The packet says: “Nielsen total soup MAT [moving annual total] volume sales 52 w/e 29.03.15”. This means that the company was top of the soup sales charts for the year ending March 29th, 2015, to be precise. Perhaps Knorr is still the most popular brand of packet soup that can be ready to eat in less than 10 minutes.

I don’t think I care what soup my neighbour loves, but according to Nudge theory, as explained by behavioural scientist Richard Thaler in his book of the same name, I probably do. We are influenced by what others around us do and like to go with the flow, it seems. Famously, Britain upped its tax take by £200 million in one year by telling people that most of their neighbours paid their tax on time.

Marketing aside, what I really want to know about my soup is what’s inside and what the packet can tell me. It’s disappointing but not really surprising to find an unlovely selection of powders, fats and sugars. There is a dab of meat, but no animal fat or bone as there would be in a homemade version.

Sugar pops up three times listed as maltodextrin, sugar, caramel syrup and lactose, which is the sugar in milk. The finished product has 1.5g in a bowl, which is not especially high.

But do you want sugar in your meat soup?

There is not a lot of meat here, however, with just 1.7 per cent beef and 0.3 per cent oxtail meat. Hence the need for sugars, the yeast extract and nameless “flavourings”. A home cook would probably use at least half a kilo of an animal’s tail.

It was shocking to see salt as the third ingredient on the list meaning that there was more salt than beef or oxtail meat put into the factory pot to cook. Check out the nutrition information and you will see there is 2g of salt in a standard 250ml serving. Adults are advised to have no more than 6g, which is about 1tsp, in a day. So if this is your only processed food of the day, that’s fine. If not, take a closer look.

Comparing brands for salt and sugar content is not easy.  Knorr counts 250ml as a serving, which is about the size of a standard soup bowl. Tesco’s own brand measures a bowl as 180ml. Lidl’s Newgate brand has put a red light on its packet indicating it is high in salt as one serving of its soup has 2.22g of salt, but then it is 282ml. Other than that, the Newgate soup differs in that it has 3 per cent beef. That sounds good until you notice that 100g of the finished soup product has 11g of salt and 11g of sugar.

So there’s no actual beef or oxtail meat, just an extract.

Making oxtail soup is a laborious process that involves using the tail of an ox or most likely a cow, with all its fat, bone and gristle.

These soups may be warm and comforting but they bear little relation to the original for nutrition.