Witch pickings: Halloween treats to bake with the kids 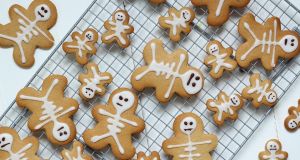 Method
In a mixing bowl, cream the butter and sugar, add the golden syrup and egg yolk and mix.

To this add the flour, spices and bread soda. Mix.

You will need to add a small amount of water to help bind.

Once a dough is formed, wrap and chill.

Preheat your oven to 170 degrees.

Line two trays with parchment and set aside.

On a floured surface, knead and roll the gingerbread dough and, using a gingerbread man cookie cutter, cut out the cookies and place on the tray.

This goes into the oven to bake for 10 minutes or until lightly golden brown.

To decorate, simply add a small amount of water to the icing sugar to create a thick paste, place this in a piping bag and pipe a skeleton design on the cooled cookies.

For added detail you can pipe on eyes and so on using dark chocolate.

Tip
To ensure the gingerbread keeps its shape, you can chill again before baking.

Method
In a mixing bowl, combine the butter, icing sugar, egg, peppermint extract (if you don’t have peppermint, you can use vanilla) and green food colouring.

Mix until a dough is formed.

Wrap in clingfilm and chill for 30 minutes.

Preheat your oven to 160 degrees.

Once rested, divide the dough into 30 pieces and roll into finger-shaped biscuits.

Press an almond into the end of the biscuits to give the appearance of a nail.

Squeeze biscuit near the tip and again near the centre of each to give the impression of knuckles. You can also cut into the dough with a sharp knife at the same points to help give a more finger-like appearance. Arrange the shaped biscuits on the lined baking trays.

Place in a preheated oven and bake for 20 minutes.

Once baked and cooled, remove the almond and squeeze a small amount of strawberry jam into the cavity and replace the almond.

Tip
Try and use food-colouring paste rather than liquid as the colour pay-off is better.

Method
In a bowl, cream the butter and both sugars.

Add the egg and vanilla and mix.

Finally add the flour, salt and bread soda and mix until a smooth dough is formed.

Wrap in clingfilm and chill for 30 minutes.

Preheat the oven to 170 degrees.

Once the pastry is rested, roll on a floured surface and, using a cutter, cut out 25 circles.

Place these on two lined trays and egg wash.

Bake for 8-10 minutes or until golden brown.

Remove and allow to cool slightly.

Once cold, stick on a Rolo with some melted chocolate and finish decorating by piping on the legs and adhere the edible eyes onto the Rolo.

Tip
If you cannot buy edible eyes, just use white and dark chocolate instead.

Method
In a bowl break the cake into crumbs and add the cream cheese and vanilla extract.

Mix until it all comes together and scoop out 15 pieces and roll between your hands to create smooth balls.

Place the white chocolate in a bowl over a pot of gently simmering water until melted. Set aside.

Take the cake balls from the fridge and, using a fork, dip in the white chocolate and place on a lined tray. Once all coated, chill.

Take the remaining chocolate and put into a piping bag and pipe random lines all over the cold cake balls to give the mummy effect.

Add some red colouring to the white chocolate and dot this on for the eyes and mouth.

Tip
If you buy a gluten-free sponge, this is also a lovely recipe for coeliacs.