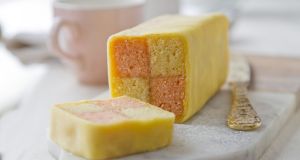 A simple sponge cake is a gateway to a world of fun. Novelty cakes are 10 a penny these days, but in times past it took a grand event such as a royal wedding to create a conceptual celebration cake such as the classic Battenberg, whose four squares represent four princes. Loved by many, it still reigns supreme along the aisle of your local shop. You can’t miss its cheerful chequerboard markings and Neapolitan colouring. It is equally loathed by millions. (Perhaps they don’t like marzipan.)

If you have a bit of time, this is the ultimate home-made cake to present for afternoon tea. The predominant apricot and almond flavours are cosy companions. The apricot jam is the “glue” holding the cake pieces together (less traditional, but raspberry jam could also be used). The almond paste (marzipan) envelops the cake. It is intensely sweet, so to soften the sugar rush I recommend rolling out the marzipan thinly. Another tip is to keep your marzipan chilled as it can become sticky and difficult to roll out if handled too much.

If you have a budding engineer in your house, they will enjoy the construction phase, building the two-by-two blocks of sponge to create the signature chequerboard pattern. A square cake tin with a paper divider in the middle enables you to bake both coloured sponges together. After that it is not overly complicated. Some sponge trimmings will be left over and these can either be frozen and used in trifle or rolled up with any remaining marzipan and dipped in chocolate to make cake pops. When using food colouring, buy paste or gel colourings as they do not fade when baked.

Preheat the oven to 180 degrees (fan). Cut a rectangular sheet of parchment paper, ensuring the width is twice the width of a 20cmx20cm square cake tin. Fold the paper in half and insert a piece of cardboard in the fold, sellotape to create an upright perpendicular divider. Now grease the tin and line with the divided compartments.

Using an electric mixer, cream the butter and sugar together until pale and fluffy.

On a slow whisking speed, gradually add in the eggs, one at a time. Stir in the vanilla essence. Gently fold in the flour until fully incorporated. Divide the mixture in half into two separate bowls (weigh each half for equal quantities of batter).

Insert a clean skewer into the food colouring (paste or gel) and add to one half of the mix to give a strong pink colour. Leave the batter in the second bowl plain.

Pour batters into separate sides of the tin. Bake in a preheated oven for 20-25 minutes or until slightly risen and a skewer inserted into the centre comes out clean.

Transfer the cake to a wire rack to cool. Use a serrated knife to cut the sponge into four neat long fingers equal in size. While matching up opposite colours, trim away uneven edges to ensure they fit together as a square block.

To assemble, heat the jam and sieve it to remove any lumps. Gently spread the jam along the edges of the cake slices being joined together. Press the pieces together firmly.

To wrap in marzipan, dust icing sugar over a sheet of parchment paper on a work surface. Thinly roll out a rectangle of marzipan (four times the width of the cake). Spread jam over one length of the cake and position the jam-covered side on the marzipan to one side of the rectangle. Spread more jam over the remaining long sides and firmly roll the cake over towards the opposite edge, keeping the edges square while wrapping it tightly in the marzipan.

Trim and form a neat seam under the base of the cake. Slice either end to expose a delightful cross-section of the colourful squares.

Variation
Try different flavourings of the sponges. Add ½tsp almond essence to the plain sponge mixture or freeze dried raspberry powder to the pink sponge (which will also substitute as a natural food colouring).

The Irish-American who led the last invasion of Britain
7