Top chefs in the pot for Ennistymon fine dining 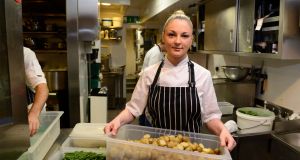 The restored 19th-century barns at Pot Duggan’s pub in Ennistymon is to host a series of monthly dinners cooked by some of Ireland’s best-known chefs. The pub is owned Trev O’Shea of Bodytonic, the music, events and venues group, and the guest chef series is being organised by Eatyard, the company’s food market venture.

Pot Duggan’s Sunday Sessions kick off on February 24th, when Paul Flynn from The Tannery in Dungarvan will be the guest chef, and will continue on the last Sunday of each month.

Enda McEvoy of Loam in Galway will man the stoves in March, with Gráinne O’Keefe of Clanbrassil House in Dublin taking over in April. Jess Murphy from Kai in Galway teams up with Ballymaloe House pastry chef JR Ryall for a double-hander in May, and Ross Lewis of Chapter One rounds off the series in June.

The chefs will serve a three-course meal, and are being encouraged to work with local farmers and producers to source ingredients. There is one rule they must all follow: the main course must be cooked in a pot.

Tickets cost €50, including a welcome drink, and are now on sale at Eventbrite and at potduggans.com.

Kids in the kitchen at birthday parties

Deirdre Doyle’s Cool Food School, which runs food education programmes and workshops aimed at pre-schoolers and primary school children, is branching out this year with the addition of children’s birthday parties to its offering.

Doyle teaches a six-week course of 40-minute interactive classes which make learning about food a fun experience. “The children touch, feel, taste and smell the food, see how it’s grown, talk about how it’s eaten, make food rainbows, plant a lettuce, stuff mushrooms and more,” she says. It costs €30 per child, with a minimum of 12 in the class, and can be booked by pre-schools and primary schools.

Participants get to use the Clever Kiddies Food Cutter and Safety Food Peeler tools, which Doyle brings in from Australia. She has the European agency for these very clever little gadgets, which won’t put little fingers in danger but do actually work. You can buy them – at €10 each or €18 for the pair – on her website, thecoolfoodschool.ie, where you will also find details of the children’s birthday parties.

Doyle also runs workshops for teachers, based on the Sapere method of sensory food education, promoted by an international non-profit based in Brussels, and is looking for funding to develop this strand of her business as a charitable endeavour.

Danish retailer Sostrene Grene, which has branches in Dublin, Dún Laoghaire, Blanchardstown, Limerick, Cork and Athlone among its 200 stores in 15 countries, is adding a food collection to its offering.

Arriving in stores on January 31st, the range will include vinaigrettes, syrups, pickles, mayonnaises, spices, jams and savoury and sweet organic baking mixes. Look out for the lemon mayonnaise made with salted lemons from Morocco, and a mild chilli version with Piment d’Espelette.

M&S gets the January greens

The rising popularity of plant-based diets is reflected in the decision by retailer M&S to launch a vegan range of ready meals, salads and snacks. Plant Kitchen hits the supermarket shelves just in time for the Veganuary initiative, aimed at popularising the lifestyle choice.

Cauliflower popcorn with a buffalo dip (a take on popcorn chicken), mushroom stroganoff, and sweetcorn and chickpea burgers are among the new product launches. There are also vegan-friendly sourdough pizzas, in margherita and BBQ pulled jackfruit varieties, a range of ready-to-use grain packs, and tofu and soy protein products.

Plant Kitchen ready meals are the first from the retailer to be packaged in trays that can be easily recycled, and M&S is also replacing its black plastic trays with alternatives that it says are “widely recyclable”.