Blame restaurants like this on fickle crowds, sky-high rents and an emptying talent pool 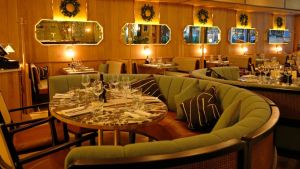 New is the new black at this time of the year. Maybe it’s the temporary nature of everything that flows through our hands but there’s a feeling that newness is prime meat for Dublin’s restaurant pack. We move through the city in a ravenous swarm descending on each new opening, Instagramming the backside out of it and moving on to the next shiny thing. Welcome to the age of disposable restaurants folks and single-use cafes, victims of our fanatical craving for novelty.

Isabelle’s is new. It’s from the Press Up group and sits within smelling distance of Sheridan’s cheese shop on South Anne Street in Dublin. You can walk through Isabelle’s and come out a block away into the Royal Hibernian Way. This is a big beast of a place. And a beautiful one.

That’s the headline news, and the €45 pizza on the menu. It’s €45 because it is topped with (deep breath now) lobster thermidor, fillet steak, truffle hollandaise, asparagus and Pont L’Évêque cheese. If that doesn’t make you simultaneously nauseous and awestruck then you may have read too many Richie Rich cartoons as a child and took them as a roadmap for your future.

They only opened three days ago, the waiter tells us when we break a rule of a lifetime and send two out of three almost-inedible plates back half eaten

This is a review based on two visits. On the first one we sit admiring all the expensive beauty on a Monday lunchtime, the heft of the cutlery and the crispness of the heavy linen napkins, the boiled sweet glow of the spirit bottles backlit behind the bar and the smooth blonde wood finish of everything. There’s a tiled wood-fired oven down in the belly of the place surrounded with doll-sized copper pans polished to an umber glow.

I’m prepared to be impressed by the food. The Press Up group have yet to dazzle consistently with something other than the decor but that doesn’t mean they haven’t figured it out by now. After all, there have been so many restaurants and press releases talking about the effort behind the food. And we’re beside Sheridan’s so the cheese should be good. Hopes are high. Dials are set to sunny.

But it turns out we’re the victim of newness. They only opened on Friday, the waiter tells us when we break a rule of a lifetime and send two out of three almost-inedible plates back half eaten. Pickled carrots got the salting stage of the pickling and then stalled so they’re just salty. A pumpkin linguine is blander than watered-down baby food and crying out for a pinch, or five, of salt. The shrimp roll and chips are good, and this provides the epiphany I need to figure it out. Passable expensive fast food. That’s the model. All the restauranty dishes on the menu are like the plastic vegetables which butchers tuck into their display fridges: there for the look rather than the eating.

But such was the howl of no-fair that they were too new, and they couldn’t charge for a lunch which we hadn’t enjoyed, that the visit fizzled out into a general act of futility all round. A second chance isn’t a kindness. It’s more of a professional courtesy, and a desire not to get the wrong read on a place if they are, in fact, going to make it better.

My pasta is better the second time, but that would not be difficult. The pumpkin is now cubed rather than puréed, but is as watery as a slippery sponge

Lunch take two is better. My friend is waiting on the curved banquette with generous cushions and a large table for two, at the opposite end of the room from my last visit.

The falafel are still coated in kataifi filo pastry threads, like Shredded Wheat, which seems an overengineering of this Middle Eastern staple, but there’s less of it so the whole thing isn’t just a hard crackle of stuff to gnaw on like a beaver.

They’re still dry, which would be fine if they had a nice pot of tahini yogurt with a squeeze of lemon for dipping. The pickled carrots are good, but there are very few of them, and there are two falafel in a bowl with three sides, which looks strangely mean, and means that each falafel comes in at more than €5 apiece, which is the kind of markup that would make your eyebrows sizzle.

My pasta is better than last time but that would not be difficult. The pumpkin is cubed this time rather than puréed, but it still tastes boiled instead of roasted. so is as watery as a slippery sponge. And by the end of the plate everything has cooled to a glutenous mass. There are sage leaves here but they don’t taste of sage. It’s a dish I could do better at home. Desserts, like last time, are fine: a tasty banana and peanut parfait with a caramelised banana half and peanut brittle, and a good fudge cake with ice cream.

I wanted to love Isabelle’s but instead of love I found understanding. Theirs is the model that is both cause and effect of a market with fickle crowds, sky-high rents and rock-bottom talent pool. There is nothing new here. It’s an idea that’s beginning to taste depressingly old.

‘Sadly my marraige ended, but it was the kick I needed to start my own journey’
8