Food file: Learn how to photograph your food, or join Kai’s Cookbook Club 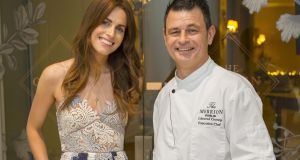 The food and lifestyle blogger bills her debut cookbook as “a gentle guide to a plant-based diet”, and it is packed with recipes for tasty-looking food that just happens to be vegan. If you are considering eating more plant-based meals in 2019, this is a great place to start.

At the Merrion, from January 17th, some of White’s favourites from the book, including Shepardless Pie and salt caramel tart with dark chocolate sauce, will feature on a three-course set menu (from €39). This will be available alongside the restaurant’s all-day dining offering.

Ruth Calder-Potts and Clovis Ferguson have launched a food company, MuTonics, and their first product is Jamu, a turmeric-based health drink that will bring a glow to the dullest winter day.

The pair knew of each other but hadn’t met until Calder-Potts, whose family run Highbank Orchards and Distillery in Co Kilkenny, was in Schull for the Fastnet Film Festival and went to the town’s food market, where she found the drink on sale on the Gubbeen Farmhouse stand, run by Clovis and her family.

“When I saw and tasted it, I wanted to help take it further,” Calder-Potts says. Ferguson had seen the drink, which has its origins in Indonesia, in London, and decided to recreate it at home. They two met up and decided to form a company to market it and develop further products.

Jamu, which is produced in Durrus, Co Cork, is made with organic fresh turmeric, tamarind, ginger, lemongrass, citrus, cinnamon, honey, salt and black pepper. Each 500ml bottle contains 3,700mg of turmeric, which they say compares favourably with other health drinks that claim to harness turmeric’s antioxidant, anti-inflammatory and immune-boosting properties.

It is on sale in health-food shops and online from mutonics.com. A 500ml bottle (enough for five daily shots) costs €12.50, and a case of six (minimum online order ) is €82, including €7 postage.

If you are looking for a culinary happening to bring some cheer to the next few months, the Cookbook Club returns to Kai Cafe and Restaurant in Galway, with three events between now and the end of March.

Each evening begins at 7.30pm with a welcome drink and a chat with Kai chef/proprietor Jess Murphy, which goes into why she has personally selected each book and what she particularly likes about it. This is followed by dinner, served family-style and made up of dishes from the book.

First up, on January 29th is How to Eat a Peach, by Diana Henry, who visited Kai when she attended Food on the Edge and became an immediate fan.

This will be followed on February 26th by Estela, by Uruguayan chef Ignacio Mattos, who trained with Francis Mallmann, Judy Rodgers, and Alice Waters. The book is based on his cooking at the restaurant of the same name, which he opened in 2013 and is one of three he owns in Manhattan.

On March 26th it will be the turn of A Very Serious Cookbook – Contra Wildair, by Jeremiah Stone and Fabián von Hauske, the chef/owners of restaurants Contra and Wildair, in New York’s Lower East Side.

The cost of attending is €55 and pre-booking is essential. kaicaferestaurant.com.

How to photograph your food

If you’ve ever wondered why some people’s food photography is better than your own, it could be because there are some tips and techniques specific to the genre, whether you’re working with your mobile phone or a fancy camera.

Castlewood House in Dingle, run by Helen and Brian Heaton, is partnering with Mark Murphy of Dingle Cookery School and Monika Coghlan of Pepperazzi Food Styling and Photography, to run a food styling and photography weekend on February 22nd-24th.

Lighting, composition, shooting angles, props and backdrops will be the opening session on the programme, followed, after lunch, by a hands-on session covering plating and styling. A guided tour of the craft brewery in Dick Mack’s pub, and a practical session at the Little Cheese Shop and Bacus Bakery, round off the weekend. Participants can bring mobile phones and/or cameras, and there will be a module on posting food photographs to social media,

Accommodation is at Castlewood House and the two-night package costs €335 per person sharing, or €405 single occupancy. castlewooddingle.com, 066-9152788.