Ireland’s most difficult restaurant diners? ‘I call them adult children’ 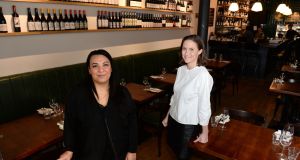 “I said I’d help him out, at the start, until things got better in the construction industry.” Famous last words.

More than five years later, Liz Matthews is still in the restaurant business with her partner Simon Barrett, and it looks increasingly unlikely that construction management will ever again appear on her CV.

The couple opened Etto in the former Govinda’s on Merrion Row in 2013, and at the end of last year they, along with chef Paul McNamara, launched a second Dublin city-centre restaurant, Uno Mas, this time with Spain as the focus.

Shortly after Etto brought a new style of Italian food to Dublin 2, Sandy and John Wyer opened Forest Avenue, which they describe as “a neighbourhood diningroom”, by the canal in Dublin 4. Three years later, the couple opened “wine bar and kitchen” Forest & Marcy, and this month they launch their third eatery. “An Italian-inspired local restaurant” is how they describe Little Forest, in Blackrock, Co Dublin.

Rachel Caviston, who had been working at Forest Avenue, is a managing partner in the new opening. Joining her are Christine Walsh, formerly of Loam in Galway, who is head chef, and Suzanne Taylor – who ran a pop-up, Rogue Pizzas, in her backyard in Dublin 4, has been recruited as pizzaiola – with a wood-fired oven to work her magic.

“It just happened that way, we didn’t plan it,” Sandy Wyer says of the all-woman line-up. “But then when we saw them all together, we thought yes, this is really exciting.”

Women make up half of the front-of-house team in Etto and Uno Mas, but in the kitchen, it’s a different story. “We’d love have more women in the kitchen. I’d love to see more CVs coming from women,” Matthews says.

“When I started, it was daunting when you went into the kitchen and you were the only woman there,” says Wyer, a trained chef who specialised in pastry, before going front of house. She thinks the industry is changing though. “There are a lot of owners who have been in the industry themselves and they are saying ‘No, I didn’t like that when I was working in kitchens before, so I don’t want to see that in my restaurant’.”

Matthews agrees. “We have never had anyone working with us who would have had any sort of attitude and we wouldn’t want that.”

What hasn’t changed much, though, are the anti-social hours that go hand in hand with a job in the restaurant trade, and can make family life difficult . Wyer and her husband have an eight-year-old daughter, Ruby, who is looked after by a childminder. On one occasion when she did have to bring Ruby into work, she got stuck in. “She was asking, ‘Can I fill the water, can I clear that plate and can I help Daddy bring the food out?’ She made €40 in tips and was, like, ‘Why am I going to school, this is amazing?’ ”

Matthews and Barrett don’t yet have to factor childcare into their schedules – “I’m working on him though,” Barrett jokes. But their commitment to their restaurants affects home life in other ways. “The restaurants consume our life, they take over everything. We try really hard not to make it all about them. We really need to get better at it. You need to draw the line and stop talking about work at a certain point.”

Working in the same restaurant as a life partner brings particular challenges, both women agree. For Wyer, it was leaving the kitchen and going front of house. “I met John in work and worked with him a good chunk of my career as a chef and pastry chef, and that was fine. But once it became him there and me here, it was a year of standing my ground.”

Both women say that Irish diners are a pleasure to deal with, although Wyer notes that there is the one per cent who are difficult: 'I call them adult children'

Matthews and Barrett were living in London before they moved home, and their different careers – she in construction, he managing restaurants – meant that they spent very little time together. “When we moved home we were suddenly together 24 hours a day. It took a year or so to learn how to work together and not drive each other crazy.”

The couple divide up responsibilities to suit their strengths. “Simon gets all the fun ones, like wine, and he is very good with people, so he ends up doing a lot of HR. I get to do all the boring book-keeping jobs, and reservations – he doesn’t go near any of that.”

Wyer says her husband is “extremely creative and completely obsessed with food” and that he can be “quite intense because of that obsession”. She says she is “a bit lighter in myself, and I think that brings a different dynamic to the restaurant. I like to make the services fun and I like to enjoy the customers.”

Both women say that Irish diners are, in the main, a pleasure to deal with, although Wyer notes that there is the one per cent who are difficult. “I call them adult children, they just believe the world revolves around them and if they don’t get their way, you are going to know about it,” she says. The majority, though “are good craic, they like a bit of banter and they want to know about you personally. ‘Do you find that?’” she asks Matthews.

“We’re really good friends with some of our customers now,” Matthews says. “I think we’re very lucky that we get to meet really interesting people.”

When they are not working, both women enjoy “going to restaurants and talking about restaurants”, and both also cook a good bit at home. “We cook, like, full dinners at 1am sometimes, though we also often live off cheese sambos,” Matthews says.

“I cook a lot at home because I love it and I don’t get to do it at work now, and John doesn’t want to touch anything in the kitchen at home; he doesn’t even know where things are,” Wyer adds.

'You are doing so many different things every day, you learn so much about everything, it’s a really multi-faceted industry'

They both also like to travel. Matthews’s eating-out guides to Spain and Italy are famous for being amazingly well researched, and road tested, and are shared widely with friends – and friends of friends. This month she and Barrett will visit Paris, and later on they are taking a fly-drive trip from Madrid to Ribera del Duero and ending up in San Sebastian. “We bring a lot back, we get a lot of ideas on trips,” she says.

The Wyers close their restaurants for two weeks in August, and for the past four years have spent that time in Italy, “with Liz’s recommendations in hand,” she laughs.

They are both positive about their industry, and about the part women play in it. “It makes me really hopeful for when Ruby is older.” And if Ruby wanted to follow her into the restaurant business, Wyer would welcome it. “ I think our industry is really rewarding,” she says.

Matthews loves the variety her career brings. “You are doing so many different things every day, you learn so much about everything, it’s a really multi-faceted industry. It’s really about survival at the very start, but now we are getting to enjoy it.”

Like all small business owners, they cannot afford to take their eyes off the ball, and tight margins are an ongoing concern. “It can spiral out of control very quickly. There’s a tiny difference between making money and really not making money at all. And you can see how things go wrong sometimes, ” Matthews says.

So are they making money? “For now,” they say in chorus.