Eatyard reopens on March 7th with new vendors and venues 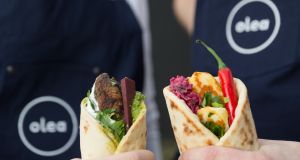 Eatyard, the street food and festival venue in Dublin 2, re-opens for the 2019 season on Thursday, March 7th, with a new line-up of vendors.

There are also expansion plans on the horizon, with a second Eatyard site, Jam Park, due to open in April at Airside Retail Park in Swords. A third Dublin site is planned for later in 2019.

The new Swords venue will feature an all-day opening restaurant on the top floor, and a rooftop space that will host Eatyard events. Tippletown, a mixed drinks festival, will take place there on May 25th, followed by Gin Fusion on July 20th.

The organisers are also currently looking for vendors for a monthly farmers’ market and are planning to run a food literary event there in the autumn.

Back at the original site at 9-10 South Richmond Street in Dublin 2, beside the Bernard Shaw pub, the new vendors include Handsome Burger. Rory McCormack and Cathal O’Connor’s set up this Galway business with an investment of €350 each, and have gone from strength to strength with their signature recipe beef burgers, sauces and loaded fries. Triple fried in beef dripping and tossed in rosemary salt, the fries are then topped with chorizo, fried vegetables and garlic and lemon aioli, or Parmesan and maple bacon and garlic aioli.

Two Venezuelan-inspired stalls will offer a taste of the South American country’s cuisine. Arepas Grill will be serving up cornbreads with toppings such as pulled beef and black beans, avocado and plantain, and shredded chicken with Cheddar cheese.

There is a Venezuelan team behind Sweet Churro too, and as well as the crunchy, sugary dough sticks, ready to be dipped in melted chocolate, they will also offer sweet crepes.

Ice-cream with a difference will also be tempting diners. The Milk Bar ice-cream truck’s selection will include black vanilla soft-serve, as well as Thai rolled ice-cream, a show-stopping way of making ice-cream that has been making waves on the festival circuit.

The Eatyard festival line-up kicks off the the Great Eatyard Bake Off on April 4th,when the food stalls will be occupied by purveyors of baked goods, cakes, pastries and desserts. The Wine & Cheese festival returns on May 16th, with the Crisp Festival to follow on June 13th.

Eatyard is open Thursday to Sunday, from noon. Table reservations can be made by emailing info@the-eatyard.com.