Beerista: Kildare brewery celebrates its fifth birthday with a beer festival in April 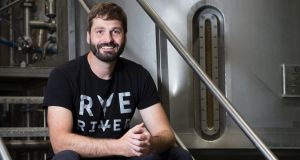 If you’ve picked up an Irish craft beer in the supermarket over the past number of years, there’s a good chance it was made by Rye River. The Kildare brewery is behind five brands on the shelves in the multiples, with McGargles its flagship range. Add to that the Crafty Brewing Company in Lidl, the recently revamped Grafters range in Dunnes, and Solas in Tesco. Then there are Rye River Seasonals, its one-off, experimental brews.

Since setting up five years ago Rye River has consistently grown its share of the domestic market – winning plenty of awards along the way, including last year for its Grafters Kolsch – while flying the flag for quality Irish beer with exports around Europe.

“We use the same high-quality ingredients for all five of our brands,” says head brewer Bill Laukitis. The brewery in Celbridge operates around the clock. “We run it 24 hours a day, five days a week, with 26-30 brews in the average week,” says Laukitis. Last year it produced some 30,000 hectolitres to make 30 different beers. “We try to utilise local resources when and where we can,” says Laukitis, adding that the brewery equipment was made in Dundalk.

“Of the 30 beers we brewed last year there were 30 unique water profiles that were used in them,” Laukitis says, explaining how the brewery’s reverse osmosis system allows it to play with different water profiles to match the style of beer.

On April 27th, the brewery is celebrating its fifth birthday with the Rye River Rising beer festival in Celbridge. There’ll be plenty of Irish breweries – Canvas, Ballykilcavan, Hopfully, Rascals, O Brother, Dead Centre among many others – and a few international ones too, including New Zealand’s Yeastie Boys.

“We wanted to show how great the craft beer scene has become,” says Laukitis. “It was a very different landscape five years ago when we started.”