Beerista: A new collaboration IPA from Eight Degrees, a saison from Yellow Belly and next weekend’s Beer Bazar at 57 the Headline 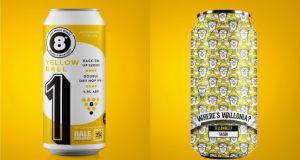 It’s interesting to see a few of the classic, clear IPAs reappearing on the shelves, though there’s no denying that most new craft beers these days are of the hazy kind. Eight Degrees’s latest release is called Yellow Ball, and it bucks the trend by pouring a deep and clear gold.

This double dry-hopped IPA, at 5.9 per cent, is unlike most of the soft-bodied and sweeter northeastern IPAs that are dominating the market at the moment. It’s got bags of lovely, refreshing hoppy aroma and flavour, with a bit of tropical fruit, and has a more malty profile and an assertive finishing bitterness.

Yellow Ball is the creation of a three-way collaboration between Eight Degrees, which provided the malt, Bale Breaker Brewing in Washington choosing hops from Yakima Valley, and Revolution Brewing in Chicago having its pick of yeast.

Eight Degrees – which was bought by Irish Distillers, the makers of Jameson, in May 2018 – has eight collaboration beers planned for 2019. It’s all part of their Rack ‘Em Up series to celebrate their eighth birthday, so it’ll be interesting to see what collaboration comes next.

Where’s Wallonia was first made by Wexford’s Yellow Belly in 2016 and has just been re-released. This special edition saison comes in a lovely, brightly-coloured 440ml can that will probably remind you of a certain children’s book. You’ll get a little bit of honey and melon, a hint of spice and it’s refreshingly light-bodied and dry, just as a saison should be. Worth seeking out while it’s around.

If you’re looking for some quality beer next weekend, 57 The Headline on Clanbrassil Street Lower, Dublin, is holding a Beer Bazar on Saturday, April 6th. Some of Dublin’s best producers will be on hand, offering tastings and take-home beers, from noon to 6pm – and there’ll be hot dogs.

Recycling, reusing and reimagining rubbish into clothing and accessories
5

‘Sadly my marriage ended, but it was the kick I needed to start my own journey’
Real news has value SUBSCRIBE