Gigi, Dublin: New Italian with retro vibe but bang up to date prices

This Italian, which has a 1980s feel, is cheerful but definitely not cheap 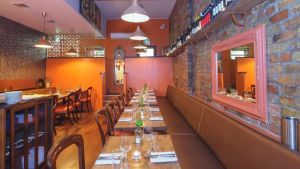 Gigi is so 1980s I’m almost surprised to be handed the bill. Surely my dad should get that while I wrestle my brothers over the free Milky Moos? There are no Milky Moos and I’m paying my own bills now. But time folds back on itself when you’ve eaten glacé cherries and had your pasta seasoned with a long wooden pepper grinder like a ghost prop of restaurants past.

The 1980s are being fracked for nostalgia these days. And the name of the new restaurant on Ranelagh’s busy strip has an even older time-warp feel of Hepburn and Hollywood and a sunlit world where everyone was young or had a twinkle in their eye.

Gigi is a mash-up of two Giorgios: Giorgio Casari, who ran The Unicorn for two decades, and a younger Giorgio taking the torch of the laid-back Italian restaurant to a new generation. Inside it’s low-lit brick and gilted wallpaper with bare wooden tables and dining chairs that look like they were borrowed from someone’s nan’s front room. There are mirrors to let you see the other diners in the small room and take the cramped feeling from everything. But the tables are so close there’s more sucking in than a Pilates class for the core engagement needed to get to the loo without bringing two flower arrangements with you.

Gigi looks lovely. There is food up front, a gleaming glass counter of hams and cheese arranged to give the feeling the restaurant has been here forever, or at least since we started buying olive oil in supermarkets rather than chemists. The menu is packed with central-casting Italian staples and the staff are charming and good at their jobs.

The food gets off to a jolly start, more so on one side of the table. It’s a rustic chicken liver paté where small chunks of liver have been left whole rather than blitzed to buttery mousse, like we’re not afraid of this organ meat any more. It’s served with toasted slices of Thibault Peigne’s Tartine sourdough (we spot the bag on the way out) and tastes of gutsy home cooking just flashed on a pan rather than the typical restaurant approach of a job lot poured and left to set in ramekins hours earlier.

Mine is less joyful. There are two kinds of toast, one spread with Gorgonzola and topped with that glacé cherry in syrup, except instead of sweet syrup the marinade here is mustard, which gives a taste jangle between heat and sweet that’s too jagged to work. There’s a thin spreading of pork paté on the other toast and then in the middle as artless a clump of rocket as I’ve seen. Just rocket, not particularly fresh or special, not dressed with anything, as if it’s not there to be eaten but just to operate as a buffer zone between two warring toasts.

Instead of the whole hog of a pasta second course and then a main, we take the middle road and do one of each. My ravioli special is stuffed with a paste of purple potatoes and mascarpone, which has the colour of putty and is fine in a blandly inoffensive way. It’s helped along with a good tomato sauce and a fresh table grating of Parmesan that wilts over the lot, but the pasta is on the chewy side and gets chewier (think ear-lobe gristle) as it cools. Alison’s cod is underwhelming, with the zucchini fritti alongside, combining watery courgette with an oily batter – which brings the whole dish down several notches.

Desserts are probably the best part of the night. There’s a fluffy tiramisu with good coffee kick served in a wide-brimmed cup. My chocolate mousse is studded with shards of white-chocolate cranberry crisp and comes with a properly retro orange sorbet that tastes of tinned mandarin segments in a great way.

I’m a fan of the restaurants serving ladlefuls of ambience with food that is merely fine. Gigi is cheerful but definitely not cheap. There’s a touch of the Ranelagh mark-up about the prices. Two toasts and some rocket for €12.50 makes the food retro but the pricing bang on trend. As for the 1980s vibe Gigi is probably spot on. Some of it is really enjoyable, some of it very ordinary, but we look back on it with fondness, which is as authentically 1980s as it gets.

Dinner for two with two glasses of wine came to €96.50