It’s the biggest growth sector in drink sales, and even the tonic has had a makeover 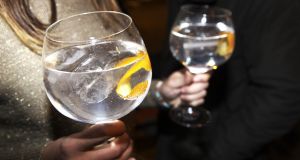 The way gin is served – fishbowl-style glasses with garnishes – adds to its fashionability. Photograph: Getty Images

No other drink has had such an image turnaround as gin. Such are the currently booming sales of the spirit in Ireland and abroad that the drinks industry is now talking about a second “gin craze”.

The first “gin craze” was during the first half of the 18th century in the UK when such was the overconsumption of the then cheap and easily available alcoholic spirit that parliament had to step in with legislation that aimed to control its availability.

The phrase “mother’s ruin” to describe the drink stems from this time – referring to an infamous case when a woman was charged with strangling her two-year-old son in order to sell his clothes to buy gin.

The new, higher price of gin saw it becoming the exclusive tipple of the upper classes, and it is only over the last few years that it has shaken off its stuffy colonial image.

Now the biggest growth sector in drink sales in Ireland, gin has stepped out of vodka’s shadow, had a craft-style makeover and is going after - and getting - the youth market.

According to the Irish drinks industry, Irish gin volume sales were at 110,000 nine-litre cases in 2014 but are expected to hit 150,000 cases by next year. The on-trade gin market in Ireland (meaning sales in bars, restaurants etc) is now worth some €50 million – an all-time high.

The dramatic sales increases are due to there being a previously low base for gin sales in this country and the emergence of a strong craft gin sector with many distilleries now producing their own “premium gin” using different blends of herbs, spices and fruits.

Irish gin brands people are turning to include Dingle Gin (Kerry), Gunpowder Gin (Leitrim) and Glendalough Gin (Wicklow). All would be regarded as “ boutique” style gins as opposed to the older-style gin labels.

The tonic water used in gin and tonics has also been given a makeover with many “premium” brands now being available, including Poacher’s Premium Irish Tonic Water, which claims to be the first premium Irish tonic water that has been specifically created with a care and attention to detail traditionally associated with the production of premium spirits.

A report by the Mintel global market research company found that while the over-45 demographic is still resistant to gin’s renaissance, the drink is becoming increasingly popular with twentysomethings.

“Our research indicates gin is now most likely to be drunk by younger consumers, suggesting that it has a chance to forge a dynamic image and move into even more innovative areas” says Chris Wisson, senior drinks analyst at Mintel of its “gin report”.

The way gin is now served in Irish bars adds to its fashionability – fishbowl-style glasses with garnishes including rosemary, sage, grapefruit and basil.

Globally, the success of Downton Abbey is being credited with the new appeal of gin - particularly in the US.

This year’s Irish Gin and Tonic Fest runs from June 25th to July 1st. The “32 County Celebration of Ireland’s finest gins”, which is backed by Fáilte Ireland, will see many bars and venues hosting special gin events.

This follows on from the successful Latin Quarter Gin Festival which was held in Galway last April and featured gin tastings, masterclasses, and food and gin pairings.

There’s now even a “gin school” at the Listoke Distillery in Co Louth. For €90, you get a tour of the Listoke estate and distillery before being introduced to a series of different gin profiles and botanicals from which you can make your own bottled, labelled and sealed personalised gin.

A couple of more upmarket Dublin hostelries report that while it was always Gordon’s gin with Schweppes tonic served in a normal spirit glass, today’s younger and more fashion-conscious customer is asking for not just a specific brand of craft gin but also a specific brand of tonic water.

With pop-up “gin hotels” now cropping up at this year’s music festivals, gin seems to have found a new audience.

The success of the craft beer market in Ireland shows that people are willing to pay more for a “premium” drink product as well as seek out locally produced offerings which are more in line with contemporary tastes.