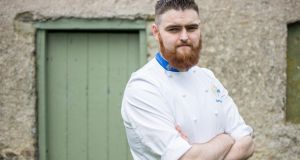 Conor Halpenny is the Euro-Toques young chef of the year 2017.

Conor Halpenny, a 23-year-old chef de partie at Chapter One restaurant in Dublin was named Euro-Toques Young Chef of the Year on Sunday night. Halpenny, from Ardee, Co Louth, was mentored for the competition by Chapter One chef-proprietor Ross Lewis and only started work at the Dublin restaurant six weeks ago.

It was Halpenny’s second time to reach the final, having also got that far in 2015 when he was working at Brabazon restaurant at Tankardstown House in Slane. He wins an expenses-paid stage (work experience) at the Mayfair restaurant of Richard Corrigan, one of the judges for yesterday’s final, and a bronze trophy designed by chef and artist Kevin Thornton.

Six young Irish chefs took part in the final round of competition in Dublin on Sunday morning, the final hurdle in a contest that has been underway since June.

The competition consisted of a social media requirement, a written submission and an interview, after which 12 semi-finalists were selected to compete in the first culinary skills test. This number was then reduced to six for the final skills test.

The theme for this year’s competition, sponsored by La Rousse Foods, was Back to Basics - Old School Cooking, and it was open to professional chefs under the age of 26. Last year’s winner, Maeve Walsh, completed her winner’s stage at Restaurant Nathan Outlaw, and subsequently joined the staff at the Port Isaac restaurant which holds two Michelin stars.

At the final round of judging, at Cooks Academy in Dublin on Sunday, each chef was required to prepare a main course and a dessert within a timeframe of two and a half hours, for judges Richard Corrigan, Anna Haugh, Graham Neville, Wade Murphy, Paul Kelly and Aidan McGrath.

The main course ingredients were Dundrum Dexter beef rib-eye and cheek and Ballymakenny heritage potatoes in Violetta and Pink Fir Apple varieties. For the dessert, the chefs could use Highbank Orchard apples in Blusher, Dabinet and Aston Bitters varieties, and Highbank apple-based drinks and spirits.

Halpenny’s winning dishes were a savoury dish of beef, cabbage, bone marrow and colcannon, and a sweet dish of set rice, fermented apple, yoghurt and malt. The judges said they were impressed with the “flair, imagination and skill in execution” demonstrated in Halpenny’s entry.

The finalists, and their mentors, also cooked yesterday for a gala prizegiving dinner at the InterContinental hotel in Dublin 4, hosted by MCs Simon Delaney and Domini Kemp.

A former winner of this competition, Mark Moriarty, also won the global San Pellegrino Young Chef title in 2015. Three Irish chefs will compete in London on Monday evening for a place in the 2018 final of this competition in Milan, Italy next June. There will also be seven chefs from the UK in contention, with only one going forward to the final.

Michael Harding: ‘Rage began to boil inside me, but I didn’t let it surface’
3

Ask the expert: My daughter is struggling with friendships
10