Paul Harrington: ‘I assumed I would be overwhelmed by my inner caveman’ 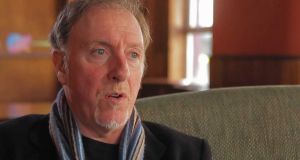 Throughout Food Month people will share with us their most treasured food memory. You can share yours at magazine@irishtimes.com

Earlier this summer, I decided to stop eating red meat and chicken, for a multiplicity of reasons. I’m sure talk in the background in recent years about a plant-based diet had some influence. I wasn’t quite prepared for the incredible benefits, but I did expect some degree of change.

However, something that did catch me by surprise was the fact that within a very short period of time, I no longer craved red meat. I assumed that it would have been the opposite, that is every time I would catch the waft of burgers on the barbecue, or a succulent steak on the stone, I would be overwhelmed by my inner caveman. But it wasn’t the case.

We all know that the mind works in mysterious ways and the connection between memory and our sense of smell, and how incredibly powerful that can be. But three words on a menu from almost 30 years ago ... how does that work? “Washington State lamb.” Like a bolt out of the blue those words came into my vegetarian head just two days ago and triggered something very primitive altogether.

I was transported back to the late 1980s, to Fenton’s restaurant in Toronto, Canada. Toronto was a city I had been visiting since the early 1970s, when my brother Derek emigrated to Canada.

I got to thinking, it can’t just be that delicious, perfectly pink rack of lamb that has stayed with me for so long. It must have been the occasion, and indeed it was a spectacular one for me at that time.

We sipped Champagne at the mahogany carved bar of the restaurant. It was decked with spectacular flowers in tall vases, bowls of shiny fresh apples and a silver ice bucket, all in soft light from candelabras with cascading beeswax.

We were all together in this beautiful glow.

Then they showed us to their glass-covered courtyard. Real trees were growing out of the ground, with twinkling fairy lights merging with the night sky, and we were seated at our table with its crisp linen and antique silverware. It was a wonderland.

I can’t remember whether I had snails in cream and Pernod served in choux buns, or the poached oysters Williamsburg to start. But I do remember pheasant, sautéed with chanterelles and rosemary, deglazed with 12-year-old whiskey, and the simply titled Washington State lamb. In 30 years it has not been bettered.

The restaurant is no more, but the memory can still tingle every epicurean bone in my body. It was a beautiful moment in time.

Singer and song writer Paul Harrington has a DVD coming out next month called Irish Eurovision Winners, and a new album early in the new year called Lights of Home.