Sprezzatura: Practically perfect pasta for under €10 in central Dublin. Bring it on

Restaurant review: This new Italian operates at breakneck speed, but does so very well 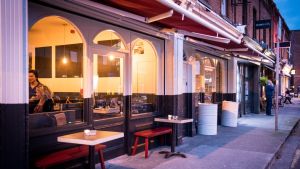 Sprezzatura is Italian for eat fast, we need the table back. Okay, it’s not. But holy pappardelle, when did the demand for pasta get so hot? There’s a breakneck speed to dining in Dublin now. It’s the small print on your Tock booking. Yes, you can have a table at 5.30pm (and the early bird is extinct so you’ll pay the same for your dinner as you would at 8.30pm) but we’ll need you gone lickety split. Phew. Speed dating is so last decade. Now we’re speed plating.

In fairness to Sprezzatura, on Dublin’s Grantham Street, it’s what margins require when your priciest plates are under a tenner. Rural restaurateurs reading this review are probably ugly crying at this point. But yes, between the canals you have to hand your customer her hat before she puts down her dessert spoon just to make way for the next wave.

Anyway, despite the rush, I like Sprezzatura, not least for its name. It’s one of those delightful Italian words that requires a paragraph to even attempt a translation. To be sprezzatura is to adopt a kind of nonchalance, a dose of the whatevs about something that required a lot of effort but you made look effortless.

Blackboard paint has been deployed by the gallon and there are no printed menus. Winelab wine comes in a resuable glass bottle on tap. You can buy a tree through offset organisation Mossy Earth, to balance your restaurant carbon foot print, which should, surely, be described here as a carbonara footprint (thanks to cartoonists Berger and Wyse for that joke). Mossy Earth’s Irish project will help the good folk at Moy Hill to plant native trees on farmland in Co Clare.

It’s an Italian meal that most Italians would recognise – to a point. There are the opening plates and then a small plate of pasta, freshly made and served with the sauce of whatever vegetable or sausage, or both, was in the larder or market that day. Typically this would be followed by the meat or fish with vegetable dish. But that’s where they stop. Like Irish people on tour, the pasta is the dinner and then it’s on to dessert.

Gnocchi are best made, cooked and eaten in the same day. Some recipes tell you to roast the potatoes and scoop out the feathery insides before rolling the potato into dough with egg and flour and dicing tubes into bitesize purses. Yeah right, I hear every weekday cook say. Pass the packet.

But gnocchi from scratch are delicious, light and airy, and slippery with starch from their cooking water, they bob to the surface just in time to be scooped out and covered in sauce. Here they come with a good tomato sauce, pine nuts and a ricotta that is slightly too chilly for the warm pasta but otherwise great.

We’ve started with my favourite opener, lots of shared side plates with simple tasty things on them: Castelvetrano olives, all that Sicilian sunshine concentrated in meaty sweet olive flesh. There’s freshly toasted Tartine rye sourdough, an essential for the stracciatella – a creamy version of Toonsbridge mozzarella that’s spreadable like cottage cheese only not as watery. There’s a Jenga block of excellent duck and ham hock croquette with a mustard seed mayo finished in a crunchy panko coating. A plate of pickled vegetables is slightly too sugary but a nice crunch contrast.

There’s something a little counterintuitive about coming out to eat the staple that’s slithered on to plates at home to the soundtrack of Drivetime and homework grumbles. But maybe we are in search of the comfort staples and here they are done very well. There’s a tagliatelle with wild mushroom that’s as woodsy as risotto but with silky housemade pasta. My pappardelle with fennel sausage is a little too chewy in the pasta and muddy in the sauce, with no fennel in its flavour, but comforting.

We finish with one each of the two desserts, a popcorn panna cotta, which just means popcorn on top, and a chocolate mousse that’s fine.

We’re handed the bill, with a friendly apology, because they’re turning tables faster than I can slap out pasta pesto on a frazzled Friday. But that’s fine. Sprezzatura is serving food made from scratch, well and cheerfully. It’s something rather difficult and, in the end, they’re making it look easy.

Dinner for three with a bottle of wine, a kefir and two desserts came to €84.40

‘I wouldn’t be here without it’: The importance of exercise to teenagers
5