Krispy Kreme: It’s morning and already a line of cars snakes through the car park

The queue is organised with metal barriers, like at an airport 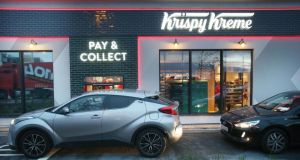 Dispatches from the outside edge of the M50, otherwise known as KrispyKremeland. On the outskirts of Dublin, deep in the undergrowth of a retail jungle criss-crossed with pathways, the route to the Kingdom of Krispy Kreme doughnuts is not hard to find– there are the enormous digital signs, for starters.

And even at 11am a line of cars snakes through the car park. It has been reorganised with temporary metal barriers, creating a queueing system similar to that of a theme park, or airport. And there are many more cars than this in the evenings.

And now I am at the shop itself, in all its architectural ordinariness, neon signs promising glory within. Krispy Kreme (KK), the US chain of doughnut cafes, has opened its first Irish outlet in the Blanchardstown Centre. It was a 24-hour drive-through, with queues through the night, but it now shuts at midnight because customers’ beeping horns have been disturbing residents. (Those headlines about people doing doughnuts in the middle of the night didn’t refer to boy racers.)

Before I can decide whether to join the queue of cars, or park and walk, a high-vis-jacketed man approaches to say I can’t stop here. Already, the moderate queue of cars is getting longer, and walking seems a better option.

Most of the people queueing in cars are from relatively close by, and curious about the fuss. Rikki Shannon and Lynnette Savage have been queuing for 20-30 minutes. They’ve been up since 7am with their baby, so this is late for them, they say. They had KK doughnuts in England and reckon they are the best.

Luke O’Gorman and Annabelle Siomido have come from Castleknock, to get some for their kids. They know Krispy Kremes from the Philippines, and say “they’re really good”. They have a good texture and more flavour, they say, and are better value than their other regular place, Offbeat, where it’s €25 for a dozen. (In Krispy Kremes you get you get two dozen for that price.)

It’s a first visit to KK for Peter Brady, who has slipped out from Ryans Garage nearby, “getting them for the lads for tea”, but he’s been line for 30 minutes now and wishes he didn’t have to queue.

Two men in a car look sheepish and giggly. They say they are supposed to be working and don’t want to give their names. They came “to see what all the fuss is about”, but say they wouldn’t be queuing if it was on their own time.

Louise Warren from Ballymun is there with Philomena Maughan and their two children. It’s her husband’s birthday. He’s doughnut-mad she says, and this is a surprise.

In another car, Alan says: “I’m the guinea pig.” He came for two boxes for work colleagues – “and I don’t even like doughnuts!” He’s stuck in the queue. “Once you’re in, you’re in. There’s no going back.”

Irene Flynn from Kilmainham isn’t into doughnuts either, and she’s “not one for queueing”, but she’s getting brownie points from her “three big boys – and Daddy Bear” for coming along.

Rachel Smith lived in Canada so she knows Krispy Kremes, and is getting some for her daughter, who has an appointment nearby. She didn’t realise the queue would be this long. “I’m re-evaluating why I’m doing this.”

As I chat to customers through car windows, a few ask me for menus, as they think I’m taking orders. It wouldn’t be a bad idea. There’s no advance display of the menu, and only when you get to the end of the long line of cars can you see what’s on offer.

You’re better off going into the shop on foot, but here too the queues reach out the door. Inside, at what was originally the pickup point for online orders, is an express line, for those buying boxes of a dozen, but many people in the much longer general line don’t know this. Behind the counter you can see the bakery area, with moving lines of doughnuts being coated with glazes.

There are many varieties – nutty chocolatta, white chocolate dreamcake, Dublin sprinkles doughnut. Are they as good or better than other high-end doughnuts?

I get my fancies and decide to sample them in the car – there are tables and chairs but it’s far too crowded and noisy, even off-peak when I’m there, to enjoy.

To this non-doughnut aficionado, these are totally fine doughnuts, though not wildly different from many others. (And, really, is  it ever worth queuing for a doughnut?) The glaze is crisp, and the texture good. They squish instantly when you bite them, and don’t bounce back or hold their shape, but they are not heavy.

Back at the Irish Times office, the food writer Marie-Claire Digby tastes one, which she finds to be “very sugary”, with a lingering taste of oil. (She wonders what they were cooked in.)

The journalist Patrick Freyne, who is not a food writer and who says he once ate a hot dog he found on the side of the road, finds his “ridiculously sweet and oily” (and not as nice as that hot dog).

They are sweet, but how healthy or unhealthy are Krispy Kreme doughnuts? The dietitian Paula Mee says: “What can I say about doughnuts? They are highly refined calorie-rich confectionery. They are poor sources of fibre, vitamins, minerals, phytonutrients and essential fats.

“Doughnuts are usually made from a flour dough and deep-fat-fried. They contain unhealthy fats such as saturated and trans fat. Extra sugar in the form of icing toppings and sprinkles can be used. They can also be filled with chocolate, jams, creams and custards. Would they be a good choice as a daily workplace treat? No.”

Try telling that to the people in the queue in Blanchardstown. Gary Monahan has come from Ballyfermot. He has had Krispy Kremes in the US – “they’re deadly” – and reckons he’d know them in a blindfold test. He had a tooth pulled two hours ago, “and me mot texted me to get the doughnuts” on his way back.