Assassination Custard: Dublin’s most under-the-radar restaurant is a gem

Review: At this tiny and brilliantly named eatery, I love everything but the bread 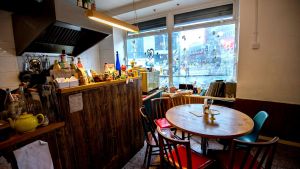 I am the only idiot on my phone around the table. Everyone else is chatting or eyeballing their neighbour’s plate to see what’s coming next. A laptop has been stowed on the windowsill bookshelf to make more room for the plates. I’m waiting for my friend to take the last seat in the place. When she arrives there are 12 of us, including the two cooks and Assassination Custard is at capacity. We wedge the door shut to keep out the breeze and begin.

How does a critic decide where to go for lunch? It’s a soup of what’s new, what’s being talked about, what’s been forgotten or just somewhere that just bowls you over when you’re least expecting it. Sometimes it’s as random as meeting two cooks on a farm as you’re pulling on some borrowed wellies to go and visit the vegetables.

Gwen McGrath and Ken Doherty were at McNally Family Farm in north Dublin preparing to drive their order back to their tiny restaurant on Dublin’s Kevin Street a few months back. That kind of commitment was enough to persuade me to follow them. It’s taken a few months but here I am in Dublin’s most under-the-radar restaurant.

They’ve painted the name Assassination Custard in white paint on the window. But when the shutter comes down the place disappears like Brigadoon. The old sign “Little Cafe” sits above the black window with the hairdressers in the room next door. Until you take a closer squint, it looks like a place for builders’ tea and breakfast rolls. There’s just a small picture of a bowl of custard, cryptic as a film location road sign, strictly for crew in the know.

Inside there are two tables, a rectangular one that fits three at a squeeze and the round one that people are budging up around to make room. An enthusiastic regular is explaining the place to a newbie. Is the menu always the same? “Some things are the same but the same things are always good,” she says. It’s an ideal to which every restaurant could aspire.

A shot glass arrives with liquid rubies in it. Actually it’s pickle juice from the pickled turnips that are on the menu. The glinting red colour comes from beets. It’s to get your appetite’s attention. It does the job with a slap of salty tang. The menu is written on a brown paper sweet bag, the flimsy kind that melded to the ooze from your cola cubes if you left them in it too long.

The woman beside me wants to order everything “or is that being silly?” (there are 10 dishes if you count the pickles). “That’s a lot,” Gwen tells her, recommending three or four plates. Not so much upselling as gently downselling. We will offer her tastes from our plates as we order almost everything they have.

I get a flashback to my other connection with this place when I taste the piccalilli. Someone gave me a jar of it a while back and I ate much of the sunny yellow tumble of tiny cauliflower florets with onion and cumin seeds out of the jar with a spoon. It’s not so much a condiment as a dish in itself. The pickled turnips are salty and they come with sweet beets on the same plate to ping-pong salt and sweet back and forth.

And then we do the Assassination Custard tasting menu. A plate of jerusalem artichokes sliced into woody rounds have the clean crispness of water chestnuts, mixed with walnuts, pomegranate seeds and fronds of dill. Their after-effects are less epic than when cooked. But there is a price. What you lose in flatulence you also lose in flavour.

The more spectacular plates are the simplest. Endives are served sliced and cooked for hours in butter so they’ve turned to silk, a dish where the line between solid and liquid is blurred with buttery deliciousness.

Chick peas have been tumbled with lardons and rosemary, my kind of dish where meat is the accent that sets off the rest. Slices of kohlrabi are smothered in a house mayonnaise with tuna for a veggie version of the Italian classic vitello tonnata.

Ray cheeks, (“three of them, who knew?” one wag says) come with a charred lime to cut through their sweet meatiness. Blood orange slices sit on top of raw turnip, sliced thin like apple slices and almost as sweet.

I love everything but the bread. It’s fine, springy fresh ciabatta but just a little bland compared to the punchiness of everything else. I finish with the “Ugly but Good”, a lumpen brown meringue made with coriander seeds and hazelnuts that could easily shoulder the name “Ugly but Excellent”.

A move to a bigger place is on hold so Assassination Custard is staying in its tiny home for the moment. It feels right. The giant new Kevin Street Garda Station across the road has given them an unexpected gift. Its gleaming glass bounces sunlight into this little cafe of thoughtful delights, throwing light on it like the gem that it is.

Lunch for two with tap water came to €50.

Facilities: Tiny. Cold. Not a place for lingering

Music: Nice, Middle-Eastern when we were there